A virtual race projection using the season best projections for all 31 girls runners competing on Saturday at the FACA All-Star Senior Race at Holloway Park in Lakeland, Florida. 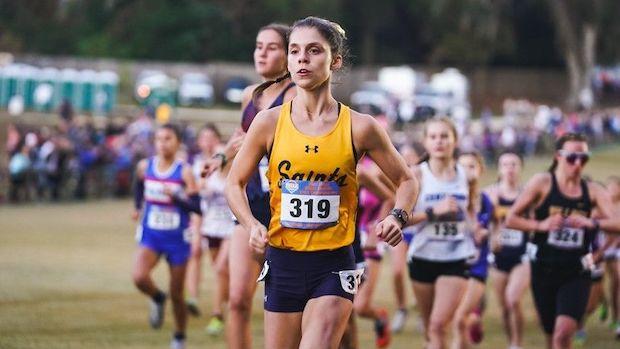 The East Region squad is certainly loaded including 5 runners who broke 19 minutes for 5K this season in Morgan Cox of Trinity Prep, Delaney Stephens of Spruce Creek, Megan Dolan of Boone, Carlyn Bobo of Lake Placid, and Paige McCaul of Bishop Moore. Cox in 1A, Dolan in 4A, and McCaul in 2A were All-State finishers in Tallahassee one weekend ago. Dolan had the highest state meet finish among all the FACA All-Star Seniors with her third place finishing time of 18:51 in the 4A girls race. McCaul had the fastest state meet time among the East Region girls at 18:44 for 13th place in the 2A race, while Cox was also under 19 minutes in the 1A race at 18:52 for ninth place. The West squad will be solid as well featuring several seniors on the 3A state champion squad from Osceola in All-State finisher Abigail Clements and teammate Kennedy Downey along with 2A All-State finisher Kate Ruona of Cardinal Mooney leading their region. Rouna had the fastest state meet performance among all the FACA All-Star seniors with her 18:34 performance for 11th place in the 2A race, while Clements ran a 5K personal best of 18:47 for 13th in the 3A state race. The North Region has Oakleaf's Sierra Barrera as their top individual following a strong 8th place run of 19:09 in the 4A girls state race for All-State honors last Saturday.

Girls race will start at 8:30 AM on Saturday followed by the boys race 9 AM.