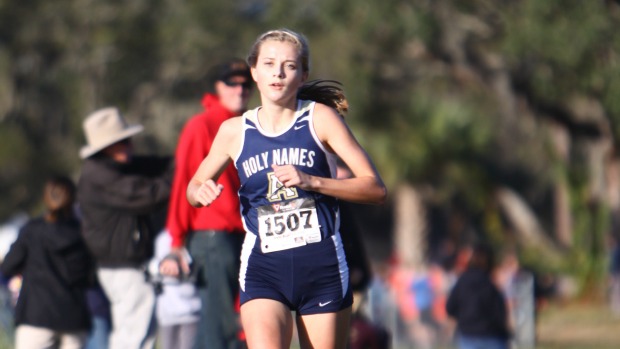 Sarah Day of West Shore looked to be the favorite coming into the girls race. However, following her district championship Day suffered an injury. She went to the doctors on Friday and they told her she had a stress fracture on her tibia lateral malleolus. The injury put her out for the season. The unfortunate circumstances paved the way for someone new to become regional champion. Claire Snyder who transferred from Tampa Prep to the Academy of Holy Names for her junior year showed why she was a top ten finisher in 1A last year. Snyder took the race out strong from the beginning with two Lemon Bay runners behinds her. Snyder crossed the line first in 20:06.80. The Mantas duo of Nicole Mis and Abigayle Weinfeld finished second and third respectively in 20:21.00 and 20:26.80. Claire Castillo, Christina Hamilton, and Anita Munoz all broke twenty one mintues to round out the top seven.

The 1-2 punch of Mis and Weinfeld led Lemon Bay to the team title with 42 points. Robinson edged out The Academy of Holy Names 93-99 for the regional runner-up trophy. Immokalee, Berekely Prep, and Titusville complete the top six teams headed to state. Golden Gate junior Alex Pedraza placed first at the 2A District 11 meet, so what does he do for an encore? Pedraza led the 2A Region 3 race from the get go and ran unchalled for 5000 meters.Christian Vasquez and Miguel Casiano of Lehigh were hanging in a three person pack with Titusville's Xavier Walton at around the 1000 meter mark with a large group ten meters back. At 2400 meters, a new group emerged behind Pedraza. Walton was still in the mix along with Leonel Delacruz of Immokalee, Erick Medina of Labelle, and Tim O'Laughlin of Jesuit. Pedraza crossed the line first in 16:44.47, the only one to break seventeen minutes. Delacruz was second, Walton third, and Medina fourth in a race that was a sprint to the finish with two seconds separating the three.