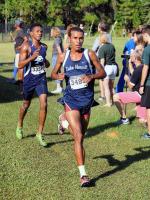 Salute To Seniors: Jan Figueroa - Lake Howell High Scho...
The 2015-2016 school year has provided some great highlights in both cross country and track across the Sunshine State. In the coming weeks many of our seniors will head out to start their college car...

Lake Howell's Figueroa Finds Perfect Fit At FGCU...
Lake Howell senior Jan Figueroa capped off his high school cross country career placing 8th at the 4A Cross Country Finals. Heading into his final season on the track, Figueroa will have the pressures...

4A State Meet Preview: Gibbons, Urzua, Hertenstein, Cru...
The culmination of the Florida cross country season will take place Saturday, November 7th at Apalachee Regional Park in Tallahassee with state championship titles for both individuals and teams on th...