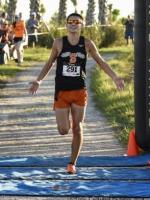 Bradtmueller, Perkins Only Boys To Crack 16 At Holloway...
The 2017 FLRunners.com Invitational has a new home at Holloway Park in Lakeland. We decided to take a look at the fastest boys times on the course since 2014....

Course Rankings: Bradtmueller, Perkins 1-2 A-T Performa...
Holloway Park in Lakeland is one of the most scenic cross country courses in the state of Florida and is one of the more difficult ones as well. The site hosts over a dozen meets in the fall so havin...

Final Rankings: Boys 3,200m: Noah Perkins 17s PR At FSU...
Seffner Christian senior and UNF signee Noah Perkins ran a 17 second PR at the FSU Relays in the 3,200m with a state leading 9:08.54. Perkins time is nearly a second and a half faster than Adam Bradtm...