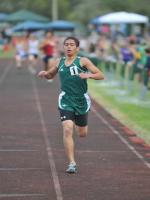 MileSplit US Boys Outdoor T&F National Leaderboard: The...
Florida has always been a sprint state. The recent outdoor national rankings have five Floridians at the top of the leaderboard including Kendal Williams in the 100 (10.28), Deron Gordon in the 300 hu...

Week In Review: Competition For All Ages...
The official season has yet to begin across Florida, but that didn&#39;t stop some middle school athletes and high schoolers from getting in some competition. The Embry Riddle Indoor/Outdoor Challenge...

Eagles Track & Field Signs Three for 2014-15...
The Embry-Riddle track & field team has announced the signings of three recruits for the 2015 season. (via Embry-Riddle University)...

Track and Field Top 50: 1600 Meter Run...
Florida might be known for its speedsters, but take a look at the numbers on the distance side. Emily Edwards, the 3A Cross Country Finals Champion has the fastest time comine in at 4:53.91 with Daesh...

South Team Takes Three Of Four Titles At FACA Senior Al...
An early morning fog greeted the top seniors in the state to Tallahassee for the FACA Senior All-Star Meet. The south team drove the furthest of the bunch, but that didn&#39;t stop them from taking so...

Winter Park Proves Why They Are 4A Favorite, Marquez & ...
Santa Fe College in Gainesville played host to two regionals on Saturday. 4A Region 1 also known as "the region of death", showcased some of the top programs and individuals in Florida&#39;s largest c...