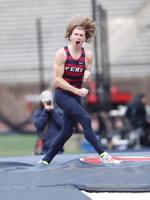 Men's Alumni Rankings: Charlotte Standout Devin Quinn S...
See who's improved to great new personal bests, and stay in touch with some of the names of the past....

Catching Up With 3x Pole Vault State Champion, UPenn Fr...
We caught up with him to talk about his first year, being named one of the top underclassmen in his conference, and much more....

Alumni Report: Move Over XC, Indoor Is Here...
For our former standouts competing at the college level cross country season is over and now it's time to shift the focus to indoors. See how they fared in the opening week including a freshmen school...