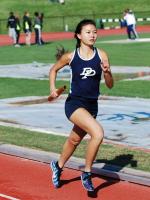 Still On The Board: Top Uncomitted Girls Cross Country ...
The early signing period for track and field and cross country athletes was in November, but that hasn't stopped the states' best from committing to colleges. With the cross country season coming to a...

Who Won The Week? Top 500 4A Girls...
St. Thomas Aquinas senior Alexa Cruz added another sub 18 minute performance to her resume. Cruz notched 4A’s top time of the week with her 17:54.73 win at the 4A District 13 Championship. Check out...

Head Of The Class: C/O 2016 Rankings...
Are you the best freshman, sophomore, junior, or senior? Where do you stack up against your peers? Find out in a rankings feature we like to call Head Of The Class. ...

Sinclaire Johnson, Steven Cross Clinch Wins At Mike Gib...
The 34th Annual Mike Gibson Summertime marked the first race for many Central Florida harriers. Over a dozen teams headed to Lake Mary for some heated competition in the Saturday morning heat and humi...