Miami Northwestern junior Aaliyah Butler took the state and sport by storm as a freshman during the 2019 outdoor season en route to winning an FHSAA state title for 400 meters with a jaw-dropping 52.25 at the state meet for the 4A crown.

Besides a 52.87 All-American fifth-place finish at New Balance Nationals immediately following that race in the same 2019 season, Butler had yet to run a 400-meter time approaching that state meet performance two years ago. Albeit, the 2020 season was cut short due to the coronavirus shutdown and her 2021 season-best was sitting at 54.13 from a win at Bob Hayes Invitational. A state best time then, but ranked her second in the state behind Hannah Douglas heading into this weekend. 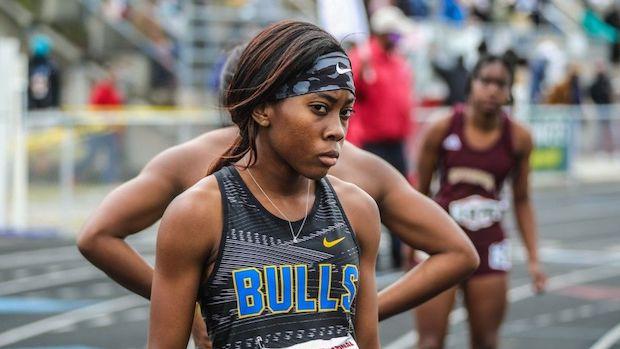 On Saturday at the Cardinal Gibbons Last Chance Meet, we got to witness that Butler is certainly ready to be running in the 52-second range again as she battled with another one of Florida's best in Pebbles Scott to take first in the seeded section with a national leading time and season-best performance by over a second in 53.05.

When Butler ran 52.25 in the 2019 season, her season-best at this point of the season was 53.11, so the junior standout for Northwestern is actually ahead of where she was two years ago. Maybe we should start talking about if she can achieve a 51-second performance this season or next year as a senior instead.

Butler also doubled back to win the 200-meter dash as well and ran an impressive time considering racing into a considerable headwind (-2.1 reading) with a 24.24 clocking. If she can run well into the 23-second range (PR of 23.65) for the 200 that will go hand in hand with her trying to best that 52.25 state finals performance from 2019.