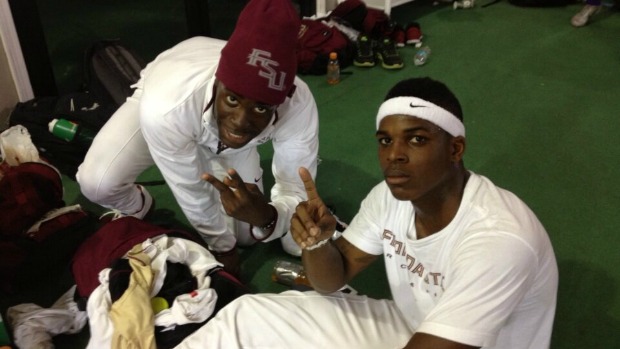 In his track and field debut two weeks ago, former Boone standout and Florida State freshman Marvin Bracy opened with a world #6 time of 6.64 and followed that up with a blazing 6.61 at the Razorback Invitational. This week he did one better going 6.57 in the prelims and a blistering 6.54 in the finals at the Arkansas Tyson Invitational. The mark ties him for world #4 and U.S. #1 with fellow American and Olympian Mike Rodgers. Bracy's time is the number one time in the NCAA this year. His time also breaks the former FSU record set by Maurice Mitchell of 6.55.

Teammate and former Tampa Chamberlain star Dentarius Locke finished second to Bracy in 6.56. Locke's time is second best in the NCAA, U.S.#3 and World #5. Bracy says after Locke ran 6.64 in the prelims and he ran 6.63 he felt like they were both getting better and he had much more to leave on the track.

"I was just chilling and got faster each round. In the final, I got out pretty well. I wasn't leading the whole race and I just saw him (Locke) coming out of the corner of my eye. I saw him pushing and I was able to hold off."

After success in his debut Bracy says he is ahead of where he thought he would be just two weeks in.

"I feel like everything is falling into place. I had a setback (during football) with the hamstring, but I guess that was just a blessing in disguise. I had it in my mind to run 6.55 here two weeks ago. I just came out here and to get that time we just had to execute and it turned out for the better."

For Locke the motivation came in the semi's when he posted a new personal best of 6.63.

"I was so focused on executing the semis were easier. I was k ind of shocked, kind of surprised. I felt good just to get in that area."

The season is early and there are a lot of meets to be ran, but this early in the season and those times. Watch out!