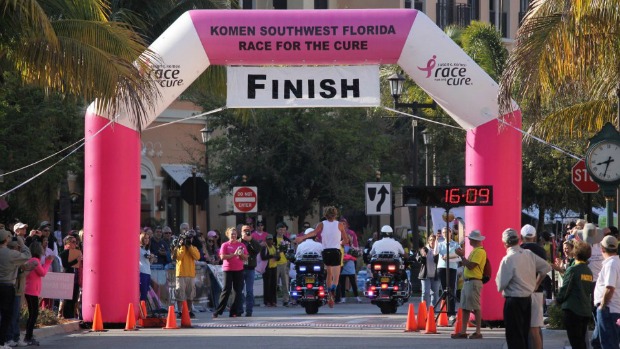 Fort Myers senior Ace Brown spent his Friday evening chasing down competition in the 1600 meters at the 52nd Annual Fort Myers Edison Relays He finished second with a new personal best time of 4:27.15. Thirteen hours later he was racing again, but not in his Green Wave uniform. Brown headed to Estero for the Susan G. Komen Southwest Florida Race For A Cure. It was his seventh time running the event in seven years. He says he started as a 6th grader when he attended Canterbury.
"I went to Canterbury school here in Fort Myers then and we had a great time fundraising and racing. It was only the 4th time I had ever run in a competitive race, but I finished in 18th overall and first st in my age division in 20:45. John Biffar won the race. I think I raised about $150 that first year."
As the years passed his times increased and so did his fundraising efforts. He won the event his sophomore year barely edging out Coach Carl Egbert in 16:32. He raised $225 in 201l. In 2013, he won the event for the third straight year.  Although he won, the race wasn't about running a new personal best, beating opponents, it was about beating breast cancer, and winning a fight that has effected so many people including someone close to the youngster.
"Over the years I have raised close to $1500. This is a cause I am committed to because my cousin in Wisconsin was diagnosed with breast cancer in 2011. She just turned 20 and is still undergoing treatment.  She is a very cool and outgoing person so it just kind of brought the diseason close to home for me."
Brown adds because he has been focusing on his senior track and field season he hasn't collected as much as he hoped for and if anyone is interested in donating they can visit his walker page.