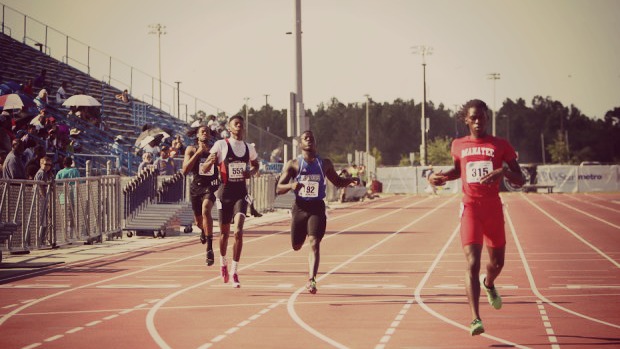 He is not Levonte Whitfield or Trayvon Bromell. He is not in a large city and his school is not known for track. They are the reigning state champions in football, yet he doesn't play. His name is Brandon Carnes, and he just might be one of the top sprinters you have never heard of.
Every day at Manatee High School Carnes sees banners hanging in recognition of state titles, but these titles do not belong to the track team, They are once again a constant reminder to all students that the football team continues to be successful year after year. Brandon's brother Brion Carnes was dominant on the football field as well, helping Manatee appear in the state final for the first time in 16 years. Eventually, Brion would leave his younger brother to pursue a full-ride scholarship to play football for Nebraska. Brandon could have followed in his brother’s footsteps, but he decided to step up and choose a new sport, track and field.
Carnes has always had a fascination of becoming faster. Progressively becoming a better runner throughout the years. Last season at the state meet he placed fourth in the 100 meter dash(10.83) and seventh in the 200 meter dash (21.99). He boast personal best times of 10.55 and 21.37 in those events.and only sees him self-going faster planning to hit 10.39 & 20.99. While the PR’s are important to him, Carnes says his eyes are set on bringing back a state title.
"Track means everything to me. What I put into it is what I'm going to get out of it and I'm always being the best I can be. I know I have a lot of potential to do great things in life and I know I wouldn't be where I am today without God."
Carnes' has helped his team tremendously this season, placing in every meet with multiple victories in the 100, 200 and 4x100 meter relay. The senior has been faced with multiple challenges throughout his career and has always came out on top. After all that success, you think he would be poised to run at most schools. However, he has yet to land a scholarship and hopes to earn one by the end of the season. He is interested in schools such as University of Oregon, UNC, USF, Clemson and Tennessee. Coach Mike Smith says whoever gets Carnes will be getting a huge boost to their program.
"Brandon is a student of track and is a very coachable athlete."

After finishing first in both the 100 and 200 at Districts, Carnes looks to ride that wave of momentum for two more weeks when the 4A state meet takes place in Jacksonville. He reminds himself of the perseverance it takes to be a champion and ultimately earning a college scholarship with this quote. "Giving up will never help. Only by giving it your all wil you truly succeed." Whether on the track or in the classroom Carnes is dedicated to getting the job done.