Deanna Hill earns her Golden Ticket to run next weekend at the Dream 100 in New York City.

Our on-site coverage team is made up of Todd Grasley, Jason  Byrne, Joe Petro, and Donald Lamb.

The weather was a hot one for the 37th Annual Golden South Classic, but the fans came out in great numbers to see athletes from across the south burn up the track.  Lake Highland Prep junior Deanna Hill (pictured above) came in as the fifth seed in this race, hoping to punch her ticket to the Dream 100 in New York City. With some of the top talent in the Sunshine State along with two of the Bahamas top sprinters it wasn't going to be easy. Seven girls came in under 11.7 seconds for the season. Hill got out to a great start and executed what she called one of her best races crossing the line in 11.63 seconds. After the race she was ecstatic to learn she would be competing against the nations' best at the Dream 100 in New York City.

Another Dream 100 entrant, Kali Davis-White of Boyd Anderson, elected not to run the 100 meter dash and focus on the 200 at Golden South. Coming off three state championships (100,200, 4x1) the senior and FSU signee ran a very impressive, 23.25, the second fastest time in the U.S. this season only to  her 23.05 she ran to win at state.

The hurdles belonged to Davis-White's teammate Daeshon Gordon. Gordon was second in the 100's at state and first in the 300's and she continued that success on Saturday. The junior swept both the 100's and the college distance 400 meter hurdles. She said after the race that she hopes to rack up more medals next year as well.

Hillsborough senior Jorian Ordway and Royal Palm Beach standout Erin "Turbo" Ford battled it out in the quarter mile with Ordway pulling away the last 100 meters. She crossed the line in a new personal best of 54.19. Ford was second in 54.76. Tarika Moses of the British Virgin Islands was third.

Eighth grader Daesha Rogers took the 800 out very fast like she normally does, looking to improve on her 2:09 win from last year, but Michelle Howell of Seminole Ridge hung back and let the youngster take her a long for a good time. Howell took the lead from Rogers midway through the second lap and didn't look back, finishing in a time of 2:09.62 just shy of the meet record. Rogers was second in 2:13.00 followed by Lakeisha Werner of the British Virgin Islands in 2:13.51.

The most exciting race on the girls side might have been the one mile run. Three of the four Florida state champions in the 1600 meters were entered in this event in Daesha Rodgers, Emily Edwards and Bridget Blake. All three and University of Florida signee Taylor Tubbs were hoping to dip under the 4:50 mark and qualify for the Dream Mile. However, it was Emily Stevens out of Alabama who edged out Edwards at the line 4:56.45 to 4:56.67 for the win. Edwards told me after she was going to take a couple of weeks off before preparing for cross country season in the fall.Tubbs was third in 4:57.90, Blake fourth in 4:58.58.

In the 3200, it was all Plant senior Julia Rodriguez. Running in her last high school meet ever, she set a new personal best of 10:53.20. She will be running at Furnam in the fall.

The field events were great as well. Lloydricia Cameron of Miami Northwestern swept the throws at the state meet and did the same at Golden South winning both the discus and shot put with new personal best marks of 159-05 and 46-03. North Florida Christian's Darrielle McQueen also swept her events at state and then duplicated that feat at Golden South. McQueen took home titles in both the long jump and triple jump. Nicole Greene equaled her state winning mark of 5-06 in the high jump. Emily Savage of Connecticut continued a successful campaign that saw  her win Penn Relays last week in the pole vault. She beat out 4A state champion Erica Sergeant with a vault of 12-06 and hopes to carry that momentum into the upcoming Connecticut state meet. 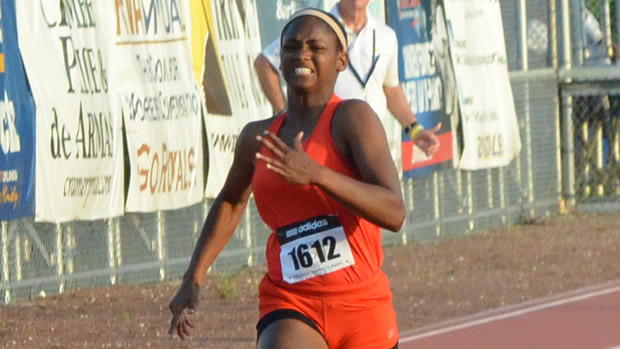