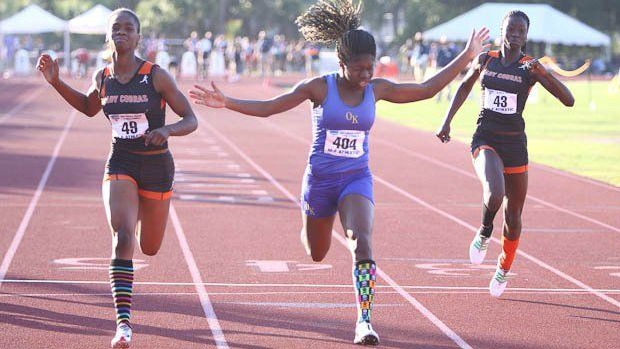 Tynia Gaither was a highly recruited track and field runner coming out of Osceola High School in 2011. She won three consecutive 4A state championships in the 100 and back to back 200 meter titles her junior senior year. Gaither was also one of the top runners in international competitions for her native Bahamas. When it was time to chose a college, she headed north to Athens, Georgia and run at UGA. She says the decision may have surprised some people.

"Most people were surprised! Once I heard that the sprint coach at UGA was Bahamian and heard the wonderful visions that he had for me as well as the future team at that time, everything sounded perfect and we got along very well. The campus is also breathtaking. During my visit, I absolutely fell in love with the coaches, and my surroundings."

The initial feelings didn't always stay that way. The former Kowboys' standout experienced challenges on and off the track.  She wasn't able to make it to nationals in the 100 meter dash and felt she wasn't performing to the level she desired, being beat by competitors she was once on the same level with.  Gaither made it to the NCAA Champsionships in the 200 and posted a collegiate best 23.23 from lane eight and says once that happen she felt like the "Tiny from Osceola again." Her two years at Georgia were an experience she won't forget, but she says she was ready for a change and the University of Southern California was the answer.
"My main reason for transferring from UGA to USC was simply because I didn't feel like I was receiving the training I needed. It just wasn't working for me personally. Coach Gilbert was one of the first coaches that made an attempt to recruit me out of high school. From the very first phone conversation that I had with her, I admired her passion for the sport and her caring demeanor. She always kept it real."

Gilbert saw Gaither at meets and instead of viewing her as competition, she continued the friendly relationship. When the former Bulldog would see her at meets and be dawning her red and black, she would be the same caring coach. Gaither says she always greeted her and asked how she was doing. To her, that says a lot about a coach, more than just her accolades on the track.

"The success that she has had with all athletes that she has coached definitely has played a role in my decision making, but not the only role. I love Coach Gilbert's character. I haven't had the pleasure of being coached by her as of yet but from the time that I've known her and all that I know about her, I can say that she cares about the success of her athletes on and off the track."

An east coast girl, Gaither will now embark to the west coast and the bright lights of sunny Los Angeles where she will have two more years of eligibility for indoor track and three for outdoor. She thinks it will be a huge transition, but is looking forward to this new stop on her track and field journey.
"It is something that I am beyond excited to do because I know that this is my road to success. My goals are to buckle down and excel in the classroom most importantly and also play catch up on the track  I'm looking forward to my future as an educated, professional athlete."