Four athletes with Florida ties headed to South America for the Pan-American Junior Championships. All four came away with gold medals.

Recent Gibbs High School graduate, Trayvon Bromell, who will enroll at Baylor in the coming days, competed in both the 100 meter dash and 4x100 meter relay. Bromell says he got out well in the 100 and finished as well as he could. He crossed the line in third behind 2013 CARIFTA champion Zharnel Hughes (10.31) of Anguilla and Andre De Grase of Canada (10.36) with a time of 10.44. The fun wasn't over for the Gatorade National Athlete of the Year. Bromell anchored a 4x100 meter relay team that included high school stars Cameron Burrell of Texas and Riak Reese of Ohio, as well as, Clemson freshman Tevin Hester. The foursome outlasted a very tough Jamaican squad crossing the line in 39.17 and keeping the United States winning tradition alive. Overall, Bromell says the experience was a great learning experience.

"It was my first international race. I did well especially it being a long season, but I take this into heart and focus on making more teams." 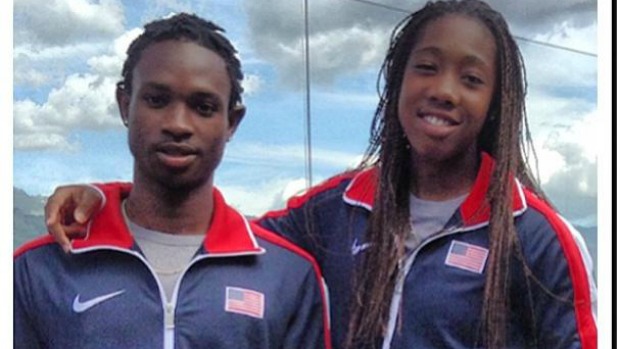 For former Miami Carol City standout Juan Paul Green, now a freshman at the University of Illinois, his first race was about making adjustments.

"During the 400 meters I had to adjust to the elevation of height which was 5,000 ft. I felt I could have done a little better, but I'm satisfied because I did what was done to the best of my ability.

Green finshed fifth in 47.08, but much like Bromell he wasn't one and done. Being the elder statesman on the 4x400 meter relay team, Green anchored Team USA to another relay gold in 3:06.57 beating out Brazil, Canada, Colombia, and Jamaica. He says winning that race and bringing home the top prize was a dream come true.

"Having a gold for the 4x4 relay team and running for the United States was a nunforgettable moment. Just hearing the crowd rooting you on and the support from my teammates and staff was great. This was by far the proudest running moments I've ever had because its such a big competitive meet."

Robin Reynolds is one of the winningest athletes in Florida track and field history with 14 championships to her name.As a freshman at the University of Florida, she has continued her athletic prowess and finished third at the USA Junior Championships in the 400 meters. Just missing out on a spot to run the open 400 meters, Reynolds ran on the 4x400 meter relay team in Columbia. Her lead off leg put Team USA in good positioning for the rest of the race, and a dominant time of 3:36.48 to win the gold medal easily over Canada and Colombia.

The most successful athlete of the whole meet might have been UCF's Alexis Faulknor. Faulknor, whose parents were both college track and field athletes, won titles in both the long jump with a mark of 6.24 meters and the 4x100 meter relay where she was the third leg. The meet caps off a stellar freshman campaign that includes the 4th highest collegiate mark of the year (6.52m or 21'4.5"), NCAA Outdoor All-American, NCAA Outdoor Academic All-American, and USA Junior National Champion in the long jump. Faulnor says the opportunity to compete against some of the top athletes in the nation was very exciting."

"It felt great to represent my country! I feel very blessed to perform in my first international meet and win two gold medals.This has been such a great year and experience. I'm very proud of Team USA."
It was a great weekend and the results only prove that the best of the best hail from the Sunshine State.