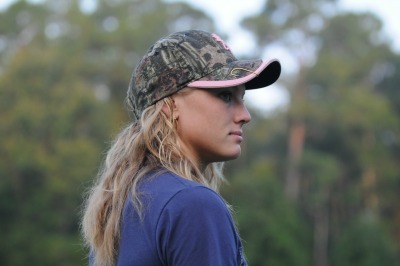 It is comforting to know that stretches of wooded trails still exist in a state that is generally regarded as a “Shopper’s Heaven,” where air conditioned malls seem to have replaced most of what we originally came here to find. Of course, “find” is the term that best described my initial visit to the UNF campus.

I will be the first to admit that my internal compass is not the least bit reliable before the sun rises to a point that makes the landscape recognizable. So there I was, circling the campus--like more than a few other disoriented drivers--attempting to discern the connection between Lots 14 and 16 and a cross country meet. All that began to clear up when I took a wrong turn on a narrow dirt road that went off into the pre-dawn darkness.

About 100 yards later, as the “narrow dirt road” became something of a serpentine “path,” I realized that I was finally on to something. But what?  Each twist and turn provided another surprise: yellow caution tape strung across secondary paths; a huge tree directly in front of me, forcing me to snake along at a crawl; giant roots worming this way and that, evidence that the forest was trying to reclaim any and all openings; a sign depicting a rattler (perhaps a warning?); mysterious sounds from deep in the foliage (Poison Arrow Tree frog? Bird of Paradise? Jaguar? Tigger?). Cross country or safari, I wondered. (I shoulda packed my machete.)

Finally, one right turn after a narrow wooden bridge (which I hoped--as I crossed—would support the weight of a two ton truck) there was a sudden opening onto a driving range… the golfing kind. (Question: when driving a vehicle on a golf course, is it proper etiquette to drive slowing around a putting green, or quickly over it?) Anyway, after another short trip into the outback, I finally emerged onto what looked like a “real” links—as opposed to a lynx.

Here before me was a Harrier’s Paradise: the pleasing sight of well-maintained sod (further enhanced by directional arrows applied for the benefit of its temporary occupants); openings into the forest with banner-flags connecting them; and runners everywhere, warming up for their respective races. Ah yes, a perfect setting for a meet…now if only the sun would come up to the point where I could take photos. 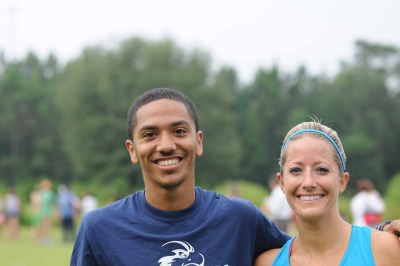 They placed first through ninth (scoring a perfect 15), then 11th and 15th.

Finishing first for the Ospreys was senior Chris Haynes, a 2010 graduate of Robert E. Lee High School. Although finishing in a personal best 15:25.52, he entered the race thinking of anything but that.

“I just wanted to hang with the team; go out fast and work with them,” Chris explained. “Coach (Jeff Pigg) said, ‘after the first mile you can cut loose and run how you feel.’ I knew that once we got out of the trails, it was time to turn it on if we had anything left.

“This was our first time hosting a cross country invitational, and also our first time on this course—as far as the golf course went. We did a workout on it Thursday, but we’ve always run the trails. It was exciting to have teammates and family here watching.”

A straw poll indicated that all of the athletes whom I spoke to shared Haynes’ enthusiasm.

“It was a good race,” agreed Stetson freshman Joseph Beery. “There were lots of roots,” he said, laughing, “I tripped over a few of them. But it was shady, and a really pretty course.”

A freshman in his first college cross country race, Beery set a PR of 16:44, and helped his Hatter team clinch second in the team standings (54 points). 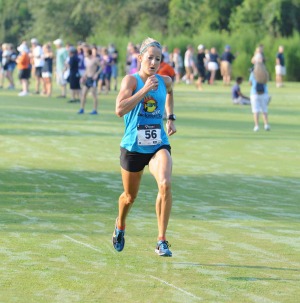 The official listing of this, and the previous race, was Intercollegiate/College Open, and that opened the door for 17 “unattached”—more or less—runners that were sprinkled in among the college field. In this race, however, “sparkled” might be a better word, because among the finishers was Julie Stackhouse.

“I used to coach here, and I train here all the time,” she said after her cool down. “I also coach Girls at Bolles High School, along with Tony Ryan. They won the Girls 2A Cross Country state meet last year (2-11-12-13-20 for 58 points). I’m also a personal trainer, and I do private coaching.

“I was just hoping to run a race that would inspire Mackenzie Wilson (sophomore, Bolles).”

Like the other runners that I talked to, Julie also enjoyed the course: a start and finish on the golf course, the shaded trails, and the twists and turns that added unpredictable variety to the race.

“It’s true cross country. I hope they’ll do it every year, and (I think) it will grow and grow. 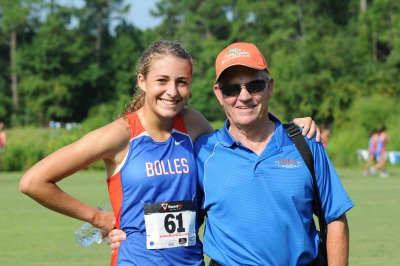 While inspirational speakers have long occupied a niche in our society, Julie Stackhouse made a strong case as an inspirational runner. Not only did Mackenzie Wilson win the Girls’ race in 18:56, but she also led her team to that title (35-38) over a tenacious Providence.

“I love Coach Stackhouse,” Wilson said, as if on cue. “I got to run with her and Coach Pentalario all summer. (Plus) I got to compete in the “Run for the Pies; it was so much fun! I won an apple pie, but my family ate it before I got a piece. That’s the Wilson family!”

Proving that you can’t win a pie and eat it too.

While it is obvious that Mackenzie Wilson loves her family just as much as she does apple pie (see attached photo), probably the only thing that might be considered a conflict in interests is her running itself.

“I love running. (After school) it’s pretty much all I do when I’m not studying and driving (she has a long commute). But my Mom, Michelle, prioritizes things. First it’s God, then family, school next, and finally running.”

But when she’s in the race—even if it is not for food—her mind is occupied by the competition.

“Coach Ryan wanted me to go out behind the leaders. Eden Meyer (second in 19:19) and her teammate (Emily Stalling, fourth in 19:31) were ahead of me. 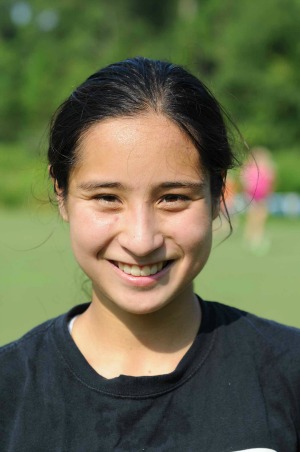 I passed Eden, and then—just past the mile marker--her teammate. I was (still) worried about Emily and Eden—who are great athletes—and Ally (Hajda, third in 19:25) and Rachel (Shapiro, eighth in 20:22)—who are super great--on my team. But I held it.”

While Wilson was building her lead over the rest of the field, the race for second was being contested between Providence’s Meyer and Bolles’ Jajda.

“For the first mile, I was in front,” Eden explained, “but she passed me right after that. We stayed together for awhile, and then she went ahead. I finished first in a JV race once—I think it was an FCCJ race—two years ago, in 19:10, but this is the highest I’ve finished in a first meet.”

This is the year of Bolles’ Austyn Decker.

Running this race virtually alone the whole way, he not only finished an incredible 97 seconds ahead of the second finisher, but his 16:13 represents a near PR in his first meet, and reflects the  mileage he put in this past summer to run it.

But in between, he ran what amounts to the distance from his home in Jacksonville, to Galveston, Texas, or Youngstown, Ohio. 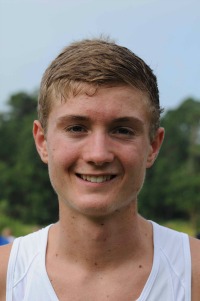 “I’ve been training with this guy Pfeiffer. He ran a 3:56 mile at Colorado State. And with Jimmy Clark from UF…and Mack Reynolds and Eduardo Garcia from UF. He (Garcia) left 1st Place Sports and I took his place there.

In the “only race,” the one for second place, it came down to a sprint between Devin Lawhorne (2nd in 17:50) of Fletcher and Felipe Herrera (third in 17:51) of Bolles. Here’s how they saw it:

Felipe: “It (the race) started out really fast. I began reeling them in. With about 800 to go, I heard someone yelling to me. I think I can kick really good.”

Devin: “It felt awesome…like slow motion. Everyone was yelling, so I knew I had to kick.”

Felipe: “I caught him, literally, right here (pointing to a spot right in front of the clock).”

Devin: “That was my PR. After the race I kind of felt I had something left… but during the sprint….”

And if they meet again?

Felipe: “I’m going to work right to the end and kick it in.”

Devin: “Stay with him until the very end and kick it in.”

While Herrera and Lawhorne—a recent transfer from Lamar County High School, in Barnesville, Georgia—were playing it close, Fletcher couldn’t stay with their top finisher. Bolles (1-3-5-6-9: 24) had some trouble with Camden (4-7-8-10-11: 40), and besides Lawhorne’s second, the top two teams took every other place from first through tenth.

Footnotes: If UNF ever has a problem with this meet, it will no doubt be popularity, and the entries it attracts. As Ms. Stackhouse predicts, this one will grow. Perhaps then a shuttle, or maybe one of those river cruises like they have in theme parks will bring us from the parking lot to the race course? Not that I didn’t enjoy the safari.