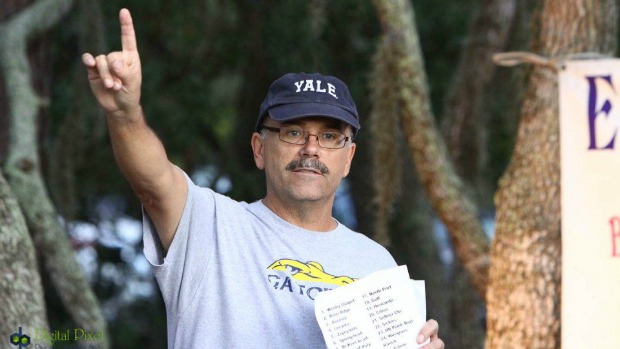 Land O’Lakes Gators cross-country coach Kris Keppel is legendary in Pasco County and well-known far beyond. His 20 years of coaching cross-country, 17 at Land O’Lakes High have entrenched him in the local community and in the hearts and minds of cross- country runners everywhere.

“It was great to get this win for him (Keppel),” senior Travis Nichols said. “He’s put in so many hours and this is the biggest turnout we’ve had.”

The senior core of Nichols, Stahl, Poore and Barnabei 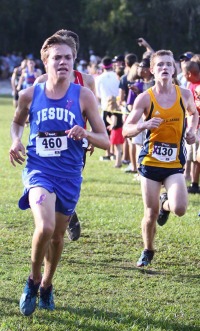 form a strong group determined to give their coach their best effort in their final year.

“He (Keppel) has been here a long time, we owe it to him to stick it through,” Barnabei said. “All he’s learned he’s learned for us.”

Barnabei and Keppel have a bit in common. Barnabei is in remission from a cancerous brain tumor that was removed, while Keppel begins chemotherapy to combat his pancreatic cancer next week. The two posed together for a photo on October 1. The plan is to release the photo after Keppel’s treatment and when he is, “cancer-free”.

“It’s hard not to keep pushing,” Poore said. “We just think of Steven (Barnabei) and (Kris) Keppel and it keeps us going through the tough times.”

17 years and two knee surgeries later, Keppel faces his biggest challenge yet but he won’t do it alone.

“There has been overwhelming support,” Stahl said. “It makes you feel good and have a good attitude about it.”

The Land O’Lakes cross-country team, printed ‘I Run for Keppel’ t-shirts and have been selling them to help raise money and awareness. Even people not affiliated with the school or high school cross-country saw fit to support the iconic coach.

“We come out (to the Gator Invitational) most years but especially this year for Kris,” Lou Menendez said. “This is his race.”

Menendez and his wife Donna sported the, ‘I Run for Keppel’ t-shirts Saturday in their show of support. Both Menendez’s run for Land O’Lakes Road Runners, an area running club of which Keppel is a founder.

Keppel was humbled by the out-pouring of support.

“It doesn’t have to be your son or your daughter, you care about every kid out there, no other sport is like that,” Keppel said. “(Cross-country) is truly a brotherhood/sisterhood, everyone looks out for each other.”

Keppel pointed out an instance Saturday when a parent from an opposing team helped a runner that had fallen get back up and finish the race. Keppel’s daughter, Meredith flew in from classes at Yale to be at the meet with her dad. Keppel’s other daughter Morgan has been back and forth from taking classes at UF. Keppel was grateful for his wife of 28 years, Darlene. Keppel thanked the doctors and staff at Moffitt Cancer Center for their work. Keppel was grateful for girls coach Karen DeHaas and said she was, “like a sister” to him. Keppel thanked Dave Rittenhour, Ray Rodriguez, and Rick Moody, coach of Warrior Running Camp.

“I’m not even sure if that’s a word but it’s something we’ve tried to keep flowing through the team,” Keppel said. 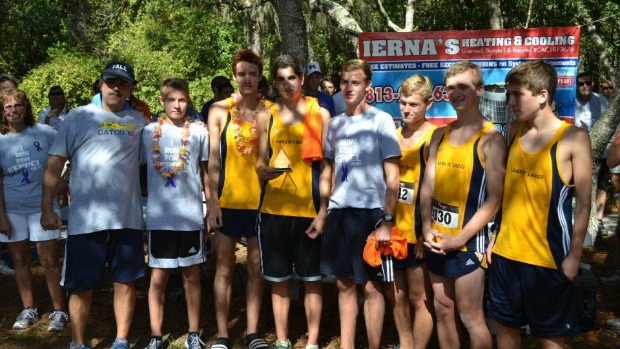 While Keppel faces the challenge of his life, his runners are in great position to make waves at states. Saturday marked the first time Land O’Lakes boy runners took three of the top four spots at the prestigious Gator Invitational. The Gators have never finished higher than seventh at states. Keppel thinks the Gator boys have a shot at the top five this year.

The 17th Gator Invitational was a great meet. It went beyond running races. There was a live DJ, merchandise booths, refreshments, a master of ceremony, a dance circle broke out at the end of the meet. More importantly, it paid homage to one of the greats in high school cross-country.