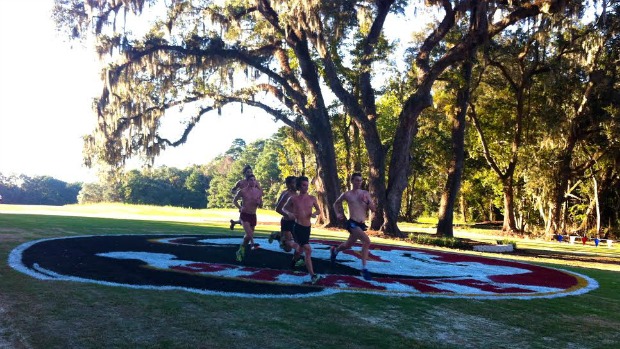 Florida State's home course - Apalachee Regional Park - will be the epicenter for some of the finest cross country racing in the South this fall when the Seminoles host the 42nd annual FSU Invitational, October 10 and 11, 2014.
Long considered one of the top events, especially at the high school level, the 2014 edition of the meet will serve a two-fold purpose once again.
"This year the Friday evening collegiate race was serve as the Pre-Region meet," FSU men's coach Bob Braman said. "The Saturday high school races will once again serve as the Pre-State meet.
"We are happy to welcome back over 2000 runners for an exciting weekend of cross country racing at the ARP. They will get to race on one of the country's best courses against great competition."
Recently, the NCAA announced the Florida State will serve as host for both the 2014 and 2016 NCAA Division I South Region Cross Country Championships. This year's South Region meet - set for Friday, November 14 - will draw more than 25 men's and women's teams from Florida, Georgia, Alabama, Tennessee and Mississippi, with the top two teams in each race advancing to the NCAA Championships.
For the third consecutive year, Apalachee Regional Park will also host the Florida High School Athletic Association State Championship meet. A date has not yet been finalized for the FHSAA State Championship races.
The 2013 FSU Invitational produced a slew of records on the upgraded course, including both college races, where FSU junior Colleen Quigley (16:55.53) took down the 5000-meter mark by more than 30 seconds. Florida A&M's Elias Chesire won the 8000-meter men's race in 24:39.10, just .90 better than the old mark. One day later, Leon High School junior Sukhi Khosla set the standard on the 5000-meter course in 14:59.45.
With added growth and maturity, the ARP course in 2014 figures to be even more conducive to fast times and outstanding competition.
Florida State's complete 2014 cross country schedule will be released at a later date.
Tweets by flrunners