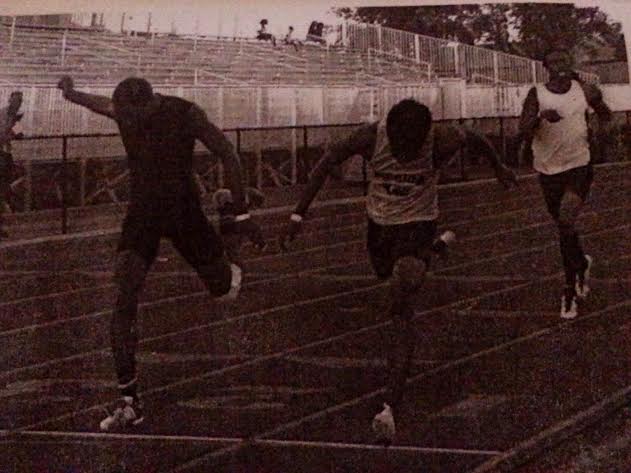 This past weekend Hallandale High School held its preseason meet, 'Hallandale All-Comers'. This preseason meet showed that many athletes from Dade,  Broward and Palm Beach  are running fast with the season only just beginning. This meet in previous years has been used at a foreshadowing of who's going to be a standout during the season. For example, the Hallandale girls last year debuted their all-star team with athletes like Lia King and Regine Williams and they got 3A runner-up with only 6 girls.  As always this meet showcase some great talent from some very young new athletes, and others a little bit older and more seasoned.

This meet was a show out for some guys, as the highlight races were the High School 1500m, 60m, 300m as well as 600m. We got a special appearance at the meet from Walter Tucker, the University of Miami football player and former Heritage state champion hurdler. He ran the 100mh and 60m and had an impressive showing... In the 60m three boys definitely dominated, all of them in different heats. Ronald Beasley of Southridge won the overall 60m with a time of 6.91, following in second place with a time of 7.01 was Antwan Musgrove and closely behind was Andrew James (Westminster Academy) running 7.04.  In the 1500 Andrew Iglesias (Pines Charter) led the whole race while Brandon Bejarano (Westminster Academy) was closely behind him. Iglesias ran a time of 4:14and Bejarano ran a personal best of 4:16.85. Boyd Anderson guys Javon Patterson and John Toussaint were also in the mix of the race coming in 3rd and 4th.

As for the 300mAndrew James stole the show by running a time of 34.15. Two sophomores also showed they were a force to be reckoned with; Amir Rasul(Miami Columbus) with a time of 34.75 and Brandon Mosley (Dillard) running 34.96. The event of the day was by all means the 600m. It was the last event of the day and it's always the best. Last year some fast times were ran with 1:21 being the winning time from Javon Patterson. This race however was a whole other story. With the help of former Everglade’s 800m standout, Daquam Lee and former Flying L, Joshua Fulton the high school boys were able to accomplish some major goals. Lee came through the first lap in :49 leading Javon Patterson and Deron Gordon to come through at :51. With 100m to go Gordon pulls ahead of the reigning champ and just when you think he had it Javon fights back and they both dip at the line at the same time. Both Javon and Deron went 1:20, but Javon again prevails to win the race. Patterson officially went 1:20.54 and Gordon ran a time of 1:20.58, pretty close if you ask me. That whole heat of 12 boys ran really fast times and set the standard for next year’s 600.

On the ladies side there were some fresh new faces as well as hungry returners. A lot of new teams were represented, as this is not a team meet, all athletes compete unattached but may be associated with a Club, no team uniforms, scored results or names to times.  Daeshon Gordon dominated her main event the 100mh running 14.00 as well as her heat of the 300mh running 43.66. Erin Ford also made her first appearance in this meet by only running the 300m winning overall along with bringing others in her heat in under :41; she ran a time of :39.41 which is a amazing place to start off her outdoor season.  Southridge freshman, Symone Mason came in a close second with a time of 39.47 and her teammate Dominique Bullock in third running, :40.25. New to the scene Palm Beach Lakes freshman, Karimah Davis definitely put her name out there in the preseason meet. Davis ran the 60m, 300m, and the 200m, she placed top 3 in her heat in every race putting up some very great times for a girl who only started running this past summer.

As well as it was for the guys it is for the girls, the 600m. I have to say this race was stacked from the beginning with girls such as Sapphire Daniels, Destiny Byrd, Symone Lindsay and myself. Being the winner of the 600m last year with a time of 1:37, I can tell you from being in both races that this race was far tougher, faster and heart wrenching than any 600m I’ve ran before. I would have liked to have repeat, but my hats go off to the senior Symone Lindsay who won the 600m with a time of 1:35.06, I went 1:36.37 and closely behind us was the freshman Kayla Johnson running 1:36.89.

Many THANKS go out to Coach Ken Key for timing the meet in such a great fashion as well as Coach John Battle and his Hallandale coaching and volunteer staff for giving us athletes such a great outlet to compete this preseason and for helping capture the names of athletes this year, so that I may write this recap and give credit [unofficially] to those who ran some very impressive times.