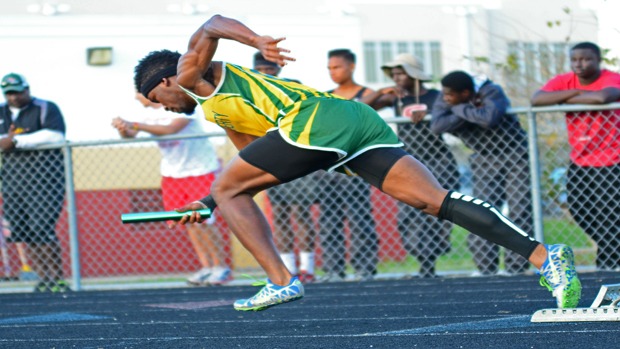 The season is full swing now, and most teams have a few meets under their belts (and some marks in the Milesplit database). Coach Kevin Harkema of St Cloud HS welcomed 25 teams to its friendly confines for the 2nd annual St Cloud Invitational. After hosting several championship meets, this event is already double what is was last year. March got started with gorgeous weather that made for a great day at the track.

The pre-race rankings were leaning toward a toss-up between 4A George Jenkins and 1A Mt Dora Bible. But this is why we run the races…. George Jenkins was registered elsewhere and didn’t come, and Mt. Dora  Bible wasn’t as strong as predicted. Kathleen High School flexed its muscle and took the title by scoring 109 points. St. Cloud finished with 89 to finish second. The leading scorers for Kathleen were Robin Griffin & Shaniqua Stevens (26 pts each) Robin was 2nd in the 100 & 200, and helped win the 4x100 while Shaniuqua was 2nd in the triple and 400, and helped win the 4x400. This is the second win in a row for Kathleen High School. Next up will be the Kowboy Invite.

The boy’s competition turned out to be a landslide. Liberty High School rebounded after a sluggish outing last week. They took the title in commanding fashion, scoring 125 points in the process. The relay teams are blazing a trail and currently have state ranked times in both the 4x100 & 4x800. Not to mention two of the top jumpers in Markel Brown & Joshua Wilson. Together Brown and Wilson scored points 55 between the long (Brown 23-4) & triple, the 200m (Wilson 22.46) and the previously mentioned 4x100 team that hit 41.91 today. Rogelio Araiza had another great day with wins in the 3200m and anchor of the 4x800. He took 4th in the 1600 today, but did not run his usual 800m race. Auburndale came in 2nd with 69 points.

Celebration Senior Jhonny Victor gave the crowd something to cheer for today when he jumped a PR of 6’10’’ on the high jump. He won the event with a 6’4’’ and then went straight to 6’10’’. He cleared that on his first attempt and went to 7’0’’. He has narrowly missed that height several times now, lets hope we can witness it soon. That mark currently places him #1 in Florida among all classifications, and ties him #3 nationally.