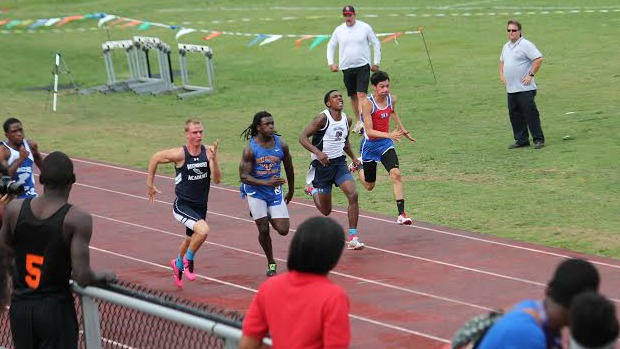 As soon as the 4x400m relay finished, the sky opened up and it poured.
Field Event Highlights
In the girls high jump, in this region it is a must to clear 5’2 to even have a shot to make it to states, the junior Brooke Oman (Westminster Academy) cleared 5-04 for the win, Julia Lindbergh (Coral Springs Christian), Ally Pond (South Florida HEAT) and Hannah Cogsil (Benjamin School) all made it with a clearing of 5-02, but it came down to misses to decide the ladies places.  For the boys high jump, Westminster Academy took  1st and 2nd with Terrel Phillips winning and clearing 6-04 and Ryan Moore claiming second clearing 6-02.
In the girls long jump, the 100mh winner, Brittan Wirth jumped 16-04.25 for the win. In 2nd place was Sarah Collins jumping 15-11, and in 3rd was Katie Nava (Westminster Academy) jumping 15-04. On the boys side, Germaine Small had the overall winning jump, jumping 21-10.05 and in 2nd was Jonathan Saintil (Dade Christian) with a 21-02. Winning the girls triple jump, was Ebony Brown jumping 35-00.25, 2nd was Hannah Cogsil jumping 33-00.5.  The winner of the triple jump for the boys was Jonathan Saintil jumping 45-03.75, and in 2nd was Germaine Small jumping 42-08.50. For 4th place Ryan Moore out jumped Kevon Spence (Glades Day School) by an inch by jumping 40-10. In the pole vault Karin Sastre (Westminster Academy) wins with a vault of 10-06. And in the guys pole vault, in 1st and 2nd were Jordan Mansour and Elijah Thompson jumping 13-06.
Finally in the boys shot put, Westminster Academy swept all four qualifying spots; first time thrower Mitchell Etienne threw 51-06 for the win, in 2nd was Luke Miseyko throwing 50-02, 3rd Hozie Hankerson with 45-09 and in 4th was Jerome Grey throwing 45-06. It was almost the same in the discus except they [Westminster Academy] took 1st, 2nd and 4th. Hozie Hankerson won with a throw of 148-02, in 2nd was Mitchell Etienne throwing 129-01, splitting up the sweep was Milton Ingraham (Dade Christian) throwing 125-07, and in 4th was Micah Smith with a 122-00.
Overall this meet showed Westminster Academy boys teams are stacked and ready to compete for the 1A State title, being led by Andrew James but his supporting cast is just as strong, which is going to make for an exciting meet.  On the girls side again South Florida Heat pulled through with their depth and showed a future is bright for this team, Westminster Academy ladies were 20 points short but still believe with the top athletes in the sprints and some field to challenge First Academy for the State Title, but 2nd through 4th is tight.
Tweets by flrunners