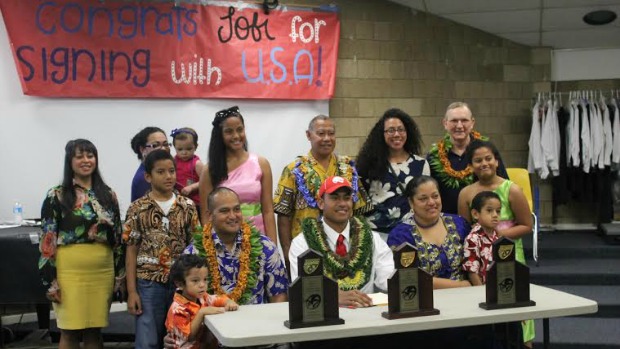 Discus co-state leader Jobi Finau has announced his college decision. The senior from Pine Forest, hurled the discus 189-6 at the FSU Relays  a mark that was later matched by Fredrick Jones at the 4A Region 4 Championship) and went onto finish second at the 3A State Finals. He says the recruiting process was stressful, but with several offers to choose from he decided to sign with the University of South Alabama.

"I would constantly talk with family members trying to get advice, talk to my coaches about the scholarship, and all just praying to give me wisdom of the right decision. I had other lower division schools contact me about throwing for them, but I chose USA because I liked everything about it. When I went in my visit with my dad he really like what he saw and if my parents like the campus then I'm convinced. The school is overall a good school and I can better myself education wise over there. As well as academics I am excited to compete with their throwers and learn from them as well."

Having the 11th best mark in the country you would think he would be more highly recruited? However, his 48-7.25 personal best in the shot put might have set him back from being on that "elite level". That doesn't surprise Finau, he knows that track field is a hard sport to be recruited in especially if you only excel in one throwing event. He says he is hoping to get stronger in the shot put and learn the other throwing events that the college has to offer.

"I think being solid in both events would be great, but I have no complaints. I was planning to go to USA before being offered. Coach Brueske saw my potential when no one else did. I planning on throwing both and hopefully I can be fitted with other events such as the hammer. It would be nice to try new events. My goal next year Is to come out and claim a spot as an elite thrower in college. It will be very hard but I am willing. I plan on hitting the weights hard to gain strength and perfect my technique in the shot and discus."