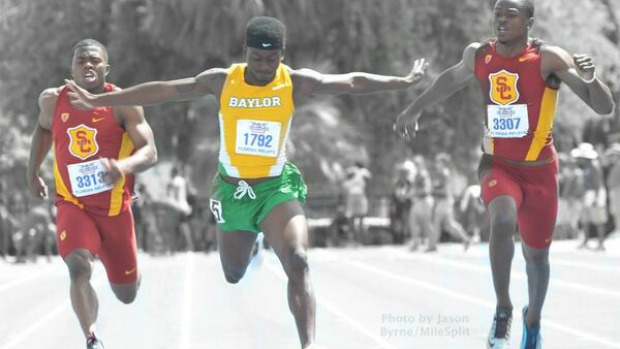 Former Gibbs High School standout Trayvon Bromell continued his fantastic freshman season as a Baylor Bear. According to Track and Field News World Rankings, Bromell's 10.01 to win the Texas Relays was the second fastest in 2014. At the Big 12 Championships this past weekend, the speedster ran 10.09, the fastest time in the prelims, and followed that by a wind-aided 9.77!  Although it was aided by a 4.2 m/s wind, that is still moving, and would give him the fastest wind-aided time in the world! Baylor finished fourth as a team behind Texas Tech, Texas, and Oklahoma State.

It is interesting to note (thanks to FSU SID Bob Thomas) that Bromell's legal 10.01 is the fastest in the NCAA with the Seminole's Dentarius Locke second with a mark of 10.06 set at the FSU Twilight meet. Locke is from Tampa Champberlain while Bromell is from St. Pete. Two areas close in proximity producing two of the fastest 100 meter runners in the college landscape.

Bromell won the 3A 100 meter state championship as a senior and capped off his high school career with a sub 10, wind-aided 9.99 to take home the title of Great Southwest Classic Champion. For his accomplishments, he was named the 2012-2013 Gatorade National Boys Track and Field Athlete of the Year.

We can't wait to see how fast Trayvon can go at the NCAA Championships. Congratulations to him and the rest of our high school alumni doing big things at the collegiate level!