Distance runners at the 38th Golden South Classic will be looking for one thing; a golden ticket to the Dream Mile. The winner of the girls and boys miles will get an automatic qualifying berth to the event June 14th at Icahn Stadium in New York and be one of fourteen runners in a quest to be the named best in the country.

They battled for the win at the Arcadia Invitational back in April in Southern California. Now Lucy Biles from Utah and Danielle Jones from Arizona are traveling to the other end of the country to face off again at the Golden South Classic in Florida, but with much more than first place on the line. An automatic spot at the starting line for adidas Dream Mile on June 14th in New York City. 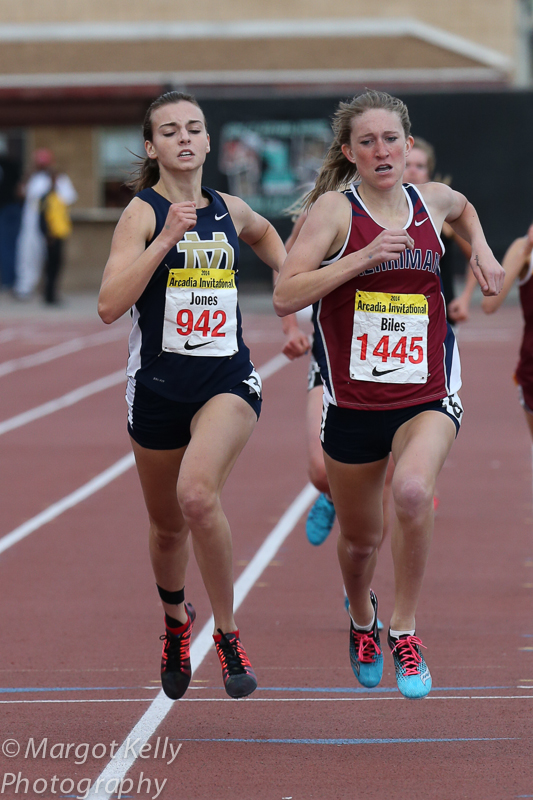 We take a look at the top entrants in the field.

Lucy Biles: The Herriman (UT) junior Lucy Biles has some of the top credentials in the field for the girls mile as a 8-time Utah state champion, while earning All-American honors with a 7th place finish at the Foot Locker Nationals in December. Her mile personal best of 4:50 came at the Arcadia Invitational, which she has run in the 4:50's several times back home at elevation in Utah.  She is coming an outstanding triple at the Utah State Championships in Provo last weekend when she won 3 titles in the 5A classification with times of 2:11 in the 800, 4:57 in the 1600, and 10:43 in the 3200.

Danielle Jones: A 4-time Arizona state champion in cross country and track, Desert Vesta (AZ) junior Danielle Jones is also joining Biles making a long trip from West to East for one final crack to earn an automatic spot to the adidas Dream Mile. Jones was a close runner-up to Biles at the Arcadia Invitational mile with a then US #3 time of 4:50.81. At the Arizona State Meet held a few weeks back, Jones broke a 15 year old state meet record in the 1600 with a 4:48.73 personal best performance.

Malia Ellington: In her last trip to Florida, Malia Ellington was victorious winning the US Youth Olympics Area Qualifier 1500 meter race in a time of 4:36 near the start of the outdoor season. A 9-time North Carolina state champion in their smallest school classification of 1A, Ellington has been well traveled and competed in many big races including the Arcadia Invitational and Penn Relays, so she is use to travel and big races. She was a close 3rd to Biles and Jones at Arcadia, so its funny how they all three have found their way to Orlando, Florida this weekend for Golden South.

Ryen Frazier: Another top contender from a small school in North Carolina, Ryen Frazier of Ravenscroft has been known more of two miler as she earned a trip to the Brooks PR meet last year for the two mile as well as opened up her outdoor season with a 10:26 3200 win at the Raleigh Relays. However, the junior Frazier has shown improved leg speed this spring including running under 5 minutes twice with a 4:53 best from the Apex Relays and dropping her 800 time down to 2:15. She should be able to mix it up with the top 3 finishers from the Arcadia Invite in Biles, Jones, and Ellington.

Gabrielle Jennings: 24-time. Yes 24-time state champion from the state of Louisiana, Gabrielle Jennings of Faith Christian is seeking even greater competition by coming to Golden South and seeing if she can break through with her first sub 5 minute race ever. The junior Jennings has an all-time best performance of 5:03 from a Sugar Bowl Classic win earlier this season in the 1600. She has run in the 5:00 range numerous times and broken 11 minutes in the 3200 twice, but will look forward to the opportunity be pulled to a PR in this field rather than leading and winning all her races back home.

Sinclaire Johnson: The top entrant and best hope from the home state of Florida, Sinclaire Johnson is hoping to score a shocking upset over the national caliber out-of-state entrants. The Lake Brantley sophomore is coming off her best 1600 race ever with a 5:01 PR victory in the rain at the Florida State Meet and has some of the fastest wheels in the race having run 56 seconds in the open 400 in the current outdoor season along with being the Florida 4A 800 meter state champion at 2:12.

It could be a repeat of the finish order from the Arcadia Invitational between Biles (1st), Jones (2nd), and Ellington (3rd), but Jones and Ellington were right there on Biles heels at the line at Arcadia, so the margin of error is small and the order could easily change.

Jennings from Louisiana and Johnson from Florida are intriguing to see how they fare and could break up the clear national caliber trio from the Arcadia race with Jennings having dominated her classification in Louisiana withouth much of a challenge, while Sinclaire Johnson being more of a middle distance specialist could be a threat if it turned into a strategic sit and kick race.

Biles is coming off a tough triple last wek at her state meet, while all others have had more than week or multiple weeks to recover from their state meets. Will Biles be more sharp and the others race rusty, or will the others be fresh and Biles fatigued from her busy weekend of races just 7 days ago in Utah. It will be hot and humid, so that might affect the times as well.

We take a look at the top entrants in the field. 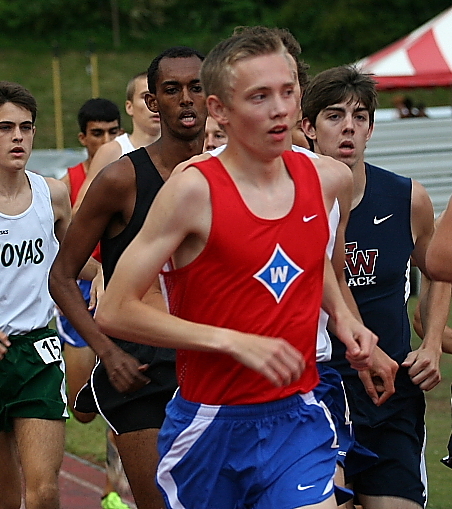 Kenan Farmer: Farmer (pictured right by Bruce Taylor), a senior at Walton High School (GA) proved he was the top runner in the Peach State by taking home titles in both the 1600 and 3200 meters at the Georgia Olympics in 4:11.47 and 9:15.90. His 1600m time is the fastest in the field. The Georgia distance ace has proven he can compete with the nation's best when he finished third in the seeded 3200m run (9:05 PR) at the Arcadia Invitational.

Zachary Albright: Albright, a senior at St. Paul's School (LA), claimed the Louisiana large school state titles in the 1600 meter run in 2013 and 2014 in addition to indoor state titles in the 1600 as a junior and senior. He boasts a personal best of 4:12.65 run at the Sugar Bowl Track & Field Classic. Just two weeks at the state meet he ran 4:12.82 which shows he is peaking at the right time.
Zack Langston: The 4-time South Carolina state champion in track and cross country, Zack Langston of Lexington is coming off a lifetime best run of 4:13 at his state meet last weekend. If Langston were to win at Golden South, he might be the first runner ever from his state to earn a spot in the adidas Dream Mile in the race's history.
Zack Summerall: Summerall a junior at Sarasota High School is one of five Floridians in the field. As a junior he was third at the 3A Cross Country Finals and third at the 3A State Finals in the 1600 meter run behind Sukhi Khosla and Nick Morken who ran two of the top fives in the nation. His time of 4:13.21 was a new personal best. This race is special for him because due to his age it will be the last track meet of his high school career. Coach John Stevenson told me his training has gone very well! They have been keeping up the volume with a few aerobic workouts and focused on sharing his speed with 400's, 300's, and 200's. Stevenson said his 400's were in the 62-64 range and that his pupil is feeling very confident and strong.

"For his race to be successful he will need to be patient in the 1st 800 but in the front back. He is very strong and can push the 3rd lap so hopefully others will follow. We have been working on his finishing 200 so I'm very confident he can out kick his opponents. Very special race for him. Very motivated to do well."
James Quattlebaum: The Christ Church (SC) senior cleaned up at the SCHSL State Championships winning four gold medals. Quattlebaum was a member of the team's 4x800 meter relay then proceeded to sweep the distance events. South Carolina webmaster John Olson says Quattlebaum runs from the gun because he doesn't have much competition in most meets so it will be interesting to see how he does in a tight knight pack. He boasts personal bests of 1:56.75 (800m), 4:25.05 (1600m), 9:25.21 (3200m), and 15:15.00 (cross country) where he won the SCHSL Cross Country State Championships. He will attend High Point University in the fall.
Franco Martins:  The Windermere Prep (FL) junior had a spectacular junior year winning the 1A Cross Country Finals and outdoor state titles in the 1600 and 3200 meters. Martins has run 4:18.34 and 9:16.03 this season. His coach Gary Cohen told me recently that Martins looked very good in workouts.

There is no "clear favorite" in this race. The first five runners have seed times separated by less than a second with the rest of the field within six seconds. Albright's 4:14.12 is the top time and I think the winner will run close to 4:10. Since the event winner gets an auto bid this may play out to be a tactical race. Intersting note: if you are a betting person go with a "Zach". Four of the fourteen runners in the field carry that name.