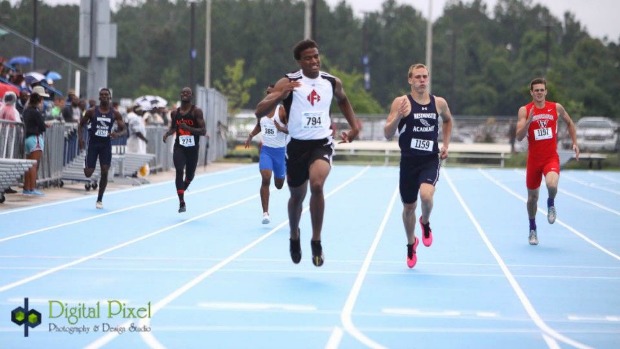 Last year, Andrew James had an amazing opening high school season going undefeated in the 400m and winning the state title. He then made his move to the summer circuit and blew peoples’ minds. Going into last year’s World Youth Trials he was definitely underestimated, as he wasn’t on the prospect list till right before the trials in Edwardsville, Illinois. Andrew made it back to the finals in the 400m, placing 7th running 49.25. World Youth had been the biggest national high school stage he had ever been on, but it was evident going into the season that James had a new drive, and a whole new feel for the sport.
This year AJ opened up his season at the Jimmy Carnes Indoor Meet, dropping a 400m time of 50.09, from there he was running :48 consistently. The USA Youth Olympic Trials were really early this year and many worried if the times would hold up throughout other trials such as Carifita. The meet was held at the Ansin Sports Complex and included countries such as Canada, Mexico, Nicaragua and a few others. This is where AJ posted his fastest time in the season (48.25) and it looked fairly easy. One thing that was made very clear was even though you may have won your event at this trial there was no guarantee that you would be picked for the team.’
From there he went on to compete in the state series, winnign districts and regionals with ease, but to everyone’s surprise he placed 2nd at the 1A State Meet with a time of 48.55. That day for him wasn’t the best, as I know his intentions were to take home the gold in the 400m, 200m and 4x400m. That day as a whole he took home a 6th place medal in the 100m, bronze medal in the 200m, silver medal in the 400m, and another silver medal in the 4x400m. For James, the only highlight of that day was winning the 1A Boys team title over The First Academy.
Recently, the US released who would be competing for them in Nanjing, China at the World Youth Olympic Games and AJ was one of those lucky few.
“It feels great. It’s an opportunity I’ve been working toward my whole life. This is one of my biggest accomplishments I’ve had as of yet in my life, and it’s a once in a lifetime ordeal to be able to compete at such a high level,” James says explaining his excitement.
Being that a spot on the U.S. team was not promised to the winner of the event, I asked AJ if he thought his time would hold up for a spot on the team, he replied, “As an athlete you can never go into an event with the mindset of failure, so yes I did believe I would.”
As of today there are less than 62 days until the opening ceremonies in Nanjing and on August 23rd the first day of track and field competition begins.
“I’ve got a lot of work to put in both mentally and physically. Only time will tell. The track will speak for itself when the time comes…. Having a chance to go to China with a talented group of kids that have the will to win just as I do will definitely be life changing,” James explains.
With athletes coming from all around the world to compete in these Olympic Games, one might not be a stranger, Jamal Walton. This year he broke Usain Bolts’ U17 record in the 400m with a time of 47.33 and he will be the new addition to the St. Thomas Aquinas Raiders. AJ and Jamal have raced many times, actually Jamal was at the U.S. World Youth Olympic Trials, but Walton jumped and was disqualified. The guys go back and forth when it comes to winning the 400m against another. I asked AJ if Jamal is in China, how that will fuel you more and he replied with, “Jamal is an outstanding runner. Ever since I’ve started track we’ve been going head to head. He has hit some tremendous times this past season and I’m just looking to hopefully get him out of his rhythm.”
With this type of accomplishment under his belt, I can actually say that he is Westminster Academy’s fastest guy and is no longer under the radar.