Torrin is pictured above winning the 2A State Championship in the 400m for Andrew Jackson HS in 2008. Photo by Barry Jones. 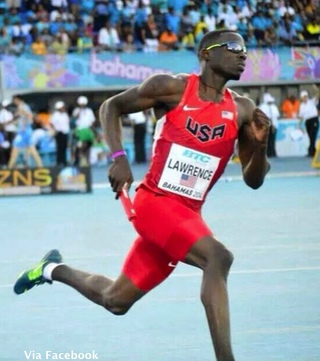 It is with a heavy heart that we must announce that Andrew Jackson (Jacksonville) and University of Georgia alum Torrin Lawrence was killed today in an auto accident. Lawrence was one of the all-time greatest 200/400 meter stars in Florida, graduating high school in 2008.

The auto accident occurred early Monday morning around 1:45 AM on I-75 near Cordele, Georgia (94 miles north of the Florida-Georgia border). Lawrence was driving down the highway when the tire of his car blew out. The car stopped in the middle lane of the three-lane interstate, where he called 911 for help. Before sheriff deputies could arrive his car was struck by a semi-truck, ejecting the 25-year-old from the vehicle. He was killed on impact.

After a stellar career with the Georgia Bulldogs, which included an NCAA 400 meter championship, Lawrence has gone on to have the beginnings of a promising professional career. Just two months ago in May, he competed with Team USA in the IAAF World Relays as part of the gold-medal winning 4x400 relay team.

During his high school career, Lawrence burst on to the scene during his junior year for Andrew Jackson. He surprised a lot of people that year going from being an unknown--coming from a school that doesn't travel much--to winning the 2A state title in the 400 meter dash with a 47.80. As a senior, he wouldn't surprise anyone and came in as a favorite. He was in the middle of a stellar year with a 46.69, 20.89 and 10.52 at the regional meet. Unfortunately at the state meet, attempting the rare 100-200-400 sweep, he pulled up injured during the prelims and missed the finals. After five weeks of rehab, he bounced back in a huge way by focusing on just the 200 meters for the Golden South Classic, winning in a then-meet-record 20.77! That wind-legal time still sits as the #6 all-time in Florida.

Lawrence had already signed with the University of Georgia that spring and stormed on to the scene there in Athens. During his collegiate career he focused on the 400 meters and set world leading times, SEC records, was on the Bowerman Awards watch list in 2010, was a two-time USTFCCCA South Region Athlete of the Year, and won an NCAA indoor title. Just last week he won a 400m race in Belgium with an internatonial elite field with a 45.32, his best so far in 2014 after six other showings under 45.5 this spring. His personal bests were 45.03 for 400 and 20.51 at 200m.