We live in a metric world, even if Americans don’t see it on a daily basis. One simple case in point are the running tracks that one sees at almost every high school and college. Because the international standard (and every Olympics) is in meters, runners today more easily identify with 5K runs than three-milers. And while we still drive our cars in ‘miles’, everyone else thinks in kilometers, 1000 meters. 1000 meters, such a nice round number. 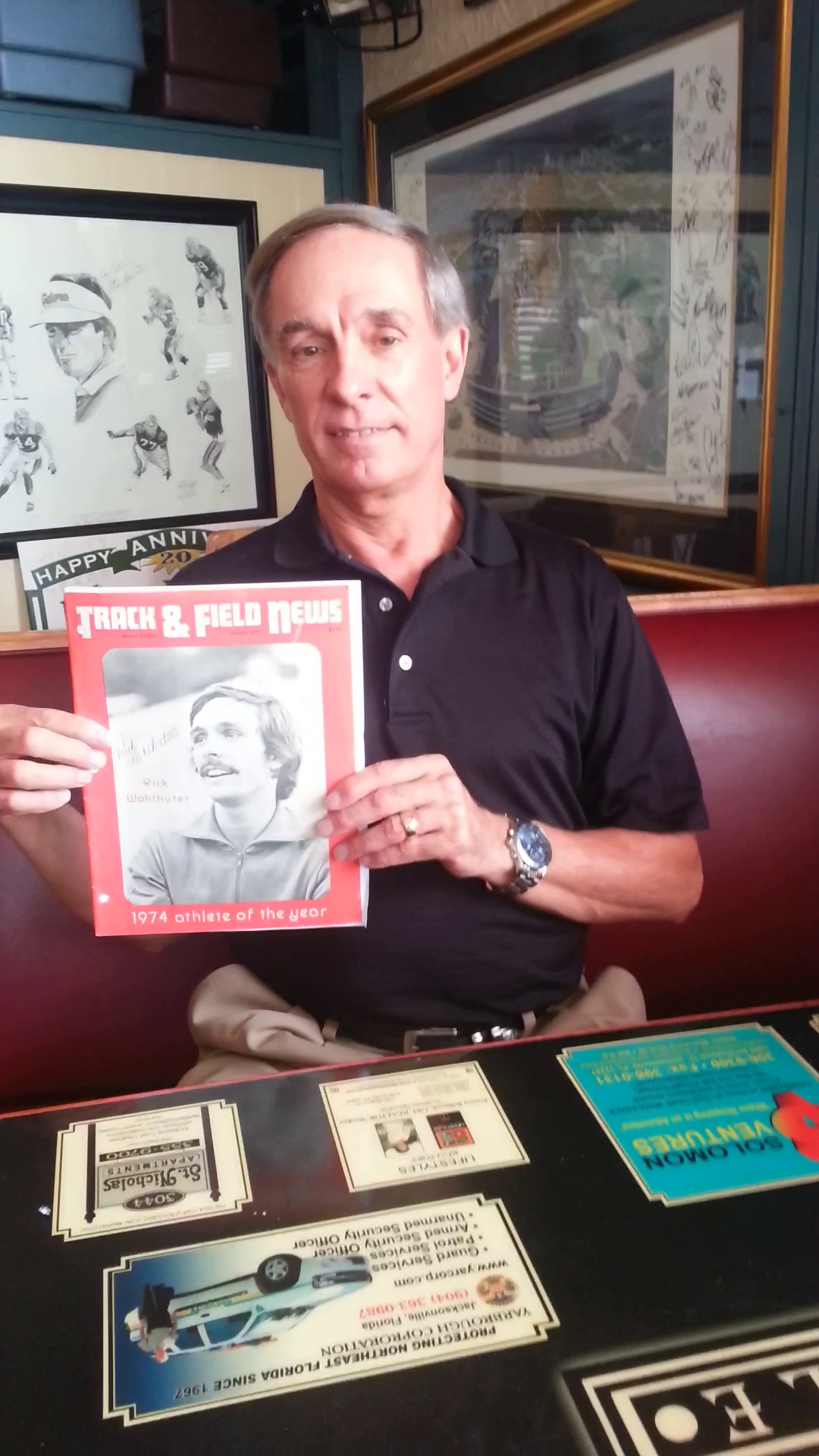 Back in the day, the 1-Mile race was big, because it was a standard everyone knew and understood. While the 1000 meters isn’t even a race in the Olympics (it skips from 800 meters, two laps, to 1500 meters (three and three-quarters laps – what’s the logic there?!). But that doesn’t mean that the 1000-meter race isn’t important and well-contested. It is run sometimes in the big European invitationals every summer. The world’s best 800 and 1500-meter runners love to see what they can do with it. The best American middle-distance runners have had a go at it, and the American record is held by one of the best we’ve had, but the reason you may not of heard of him, is that he did it FORTY years ago, and it remains unbroken even after the records around it have been broken multiple times in the ensuing years; it’s that good.

The owner of that record lives right here in Jacksonville, and on July 30 he will celebrate that night in Oslo, Norway when he ran 2:13.9 (smashing Danie Malan’s (from South Africa) 2:16.0 from the year before) and set one of the longest standing records in American track & field history. His name is Rick Wohlhuter.

He was Track & Field News’ World Athlete of the Year, making him the best runner (or field eventer) on the planet. He broke the 880-yard world record (faster than the 800 meters record also), and was the Sullivan Award winner, the best amateur athlete in America for any sport.

Rick’s high school years had shown him the potential he had. He was the two-time Illinois state champion, running a 1:51.9 for the 880 (about 0.6 to 0.7 seconds longer than the 800m. College at Notre Dame agreed with him and he steadily improved, even winning an NCAA title indoors in the 600-yard race. But it was the next year that his epiphany came. It came at the Olympic Trials in Eugene, Oregon. He said he had the crucial moment of his early career there, his first year racing after college, when he faced Jim Ryun (still regarded as one of (if not THE) greatest middle-distance runner in American history), Dave Wottle (dark-horse winner of the Olympics that year), and the hottest 800 trio at the time, Juris Luzins, Mark Winzenreid and Ken Swenson. Wohlhuter was not at all a favorite to make the team, but he knew he was in the best shape of his life. He said the pace went out very fast and he thought he was in a good position with 300m to go, when Ryun suddenly sprinted the back straightaway and instantly created a gap. Wottle covered the move, but the rest of the pack had a decision to make, try and follow this perhaps too-early break, or be patient and wait for the inevitable slow-down at the finish. Rick decided it was now-or-never and accelerated to stay behind Wottle, who was in full pursuit of Ryun. The rest of the pack stayed put, fully expecting the front-runners to run out of gas in the home-stretch. In the final straight, Wottle passed Ryun and then so did Swenson, who was gaining fast on Wohlhuter. But the tape came first and it was Wottle 1, Wohlhuter 2 and Swenson 3, to make the Olympic team. “It was then that I not only knew I could compete at the highest level, but convinced me that I could become the best.”  Alas Rick fell in the Olympic heats, but that served to fuel a greater fire for the upcoming years.

The night of the Oslo meet, Rick knew the World Record was in the cards, so he asked the meet director for a 52 second first lap, hoping to pass the 800 mark in around 1:47. His primary global rival, Kenya’s Mike Boit, was right with Wohlhuter after two laps in 1:46.8, and he knew that the WR was definitely doable with a good finish. With Boit at his heels the whole way, Wohlhuter broke the tape in 2:13.9, over two seconds better than the World Record (which Boit had also broken). He had his second World Record of the summer (the first being his 1:44.1 880 yards, equivalent to a 1:43.5 800 – the WR was 1:43.7 at the time)

When I asked him about the keys to his success, two things stood out in our conversation:

1. His attention to detail in his racing tactics. He knew what he needed to do, where he needed to be, what pace he needed and when to initiate his kick.

2. His dedication and reliance on his interval training. His bread-and-butter training was his Monday workouts of 20x200m with a 200m jog between them in one minute - run between 28 and 30 seconds. The intervals were to “expand the envelope of my anaerobic threshold”, while the “minimal rest was for aerobic strength”, so during races a hard pace didn’t feel so hard. He relied on this speed strength, rather than aerobic capacity, to sustain him to the end of a very hard 800.

The actual workouts varied from week-to-week, but he always stressed short-test intervals and long speed work.

At the time he also had a full-time job (financial management - with which he is still involved), which led to 12-hour days, but kept his training program efficient – no wasted time.

So why is his 1000-meter record still standing? Rick dismissed it as just the consequence of the infrequency of the event’s running. But that doesn’t explain why it has withstood annual assaults by America’s best. The next best American is still two seconds slower. It also doesn’t address the fact that the times he ran 1974 would still be the best in America today. Genetic gifts? Maximally efficient training? Fierce will to win? I’d say all of the above. He did admit that when he was racing in 1974, he knew he had done the training to win every race and break records. So he did.