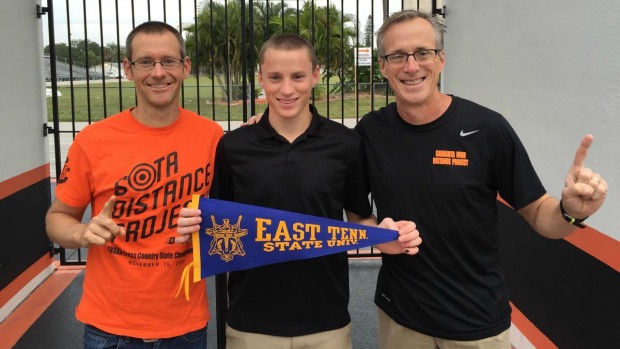 Sarasota High School senior Zack Summerall wanted to run outside of Florida. Although he considered in-state programs UNF and UF, high school coaching ties to Eastern Tennessee State University, and the scenic running of Johnson City led him to join the Buccaneers program. Summerall is one of the top distance runners in the class of 2015, having finished in the top ten in the 3A Cross Country Finals in back to back years and running in the prestigious Dream Mile last summer.

The process was a lot of fun for me. I loved taking visits and meeting a lot of new people. There were times when it was stressful for example when I would miss races or hard practices and have to do it on my own. It was kind of frustrating, but overall i enjoyed it.

Where all did you visit/consider?

In addition to ETSU, I visited UF, UNF and Arkansas. I loved all four programs and they were filled with awesome guys and coaches.

You committed to ETSU in the end. What sold you on the Buccaneers?

In the end, I think what really sold me was the area in Johnson City and the campus was just amazing along with awesome guys and coaches. I really was looking to get out of the state due to the humidity. Being a distance runner in Florida is challenging so I was looking for somewhere that had all four seasons. I also loved the mountains and the outdoors (TRAILS BABY) and that was the perfect fit. In addition to that I wanted a school that wasn't too, big but not too small.

They were in the NCAA South Regional which was in Tallahassee. With the Cross Country Finals being the day after, did you get a chance to meet the guys and the team then?

I said hi, but I didn't really get to actually talk to them they were getting ready to race. I know as a runner I don't really like being bothered while trying to get in the zone.

I know you mentioned the connection of your high school coach and the coach at ETSU? How important was that relationship knowing you will be in good hands? That was a huge impact.

I trust my coaches FULLY and i know that they would never miss guide me. So when they tell me that Coach Watts is the real deal there is no doubt in my mind that he isn't. I really felt comfortable with him just as I do with my coaches which is key for me. We got off to a great start and had a lot of laughs and inside jokes already.

You were third in the state as a junior, 10th this year, 17th at NXNSE. Some people might be surprised you chose a lesser known program. Do you feel you might be able to have a bigger impact at a school like this then maybe other programs where you'd be just another number?

I definitely feel that I could make an impact. I think that the team is good already and that they are just getting better. I know coach Watts is working on a great recruiting class and I love the fact that i have the opportunity to become part of that uprising at ETSU.

Since you can't compete in track this season. What are the plans for the next few months?

Well, I will not be going up there this January. I am actually staying in Sarasota until summer working at Victoria's Secret best job ever) and saving up some money so I'm not the typical broke college student. I will be training like always to become better. I will be jumping in some races unattached (FSU Relays, UF, and UNF Open) to see what kind of shape I'm in.

How would you sum up your high school career and what are you looking forward to about running at the next level?

If i had to describe it in one word it would be amazing. I am really fortunate enough to have had amazing coaches along with an extremely supportive friends and family.  I exceeded my goals that I set since freshman year and I couldn't ask for a better high school career. With that being said I am really excited to enter into college training and races. My obvious goal is to make it to Terre Haute for nationals in cross country and to make it to Eugene for track. I'm really looking forward to going against new competition and just running at the D1 level.