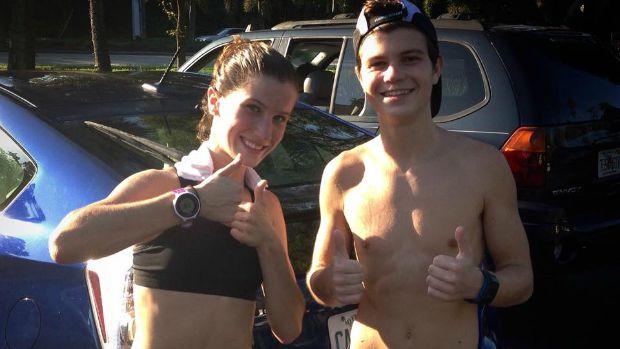 (Juniors Krissy Gear and Sam Hordinski were the top female and male finishers at the Fort Myers two-mile time trial. Photos and videos by Tyler Stowell.)

Racing season is approaching quickly and Fort Myers High School decided to shake the rust off as a complete unit at Lakes Park this morning. Coach Rob Strong arrived early to map out the half mile loop that was completed four times.

The boys took off first followed by the girls 20 seconds or so behind them. Graduate Ace Brown paced the boys up front before he heads back to run with his team at SCAD. Going through the mile together was he soon to be senior Stephen Fedec and juniors Sam Hordinski and Josh Kennedy. Following close behind was a major pack that is working really well together this summer. Coach Palmer leads the boys and said "I think we will be successful as a team if the guys are willing to run as a unit in the tough parts of the race". In the mix with the pack was Krissy Gear, she has really worked hard this summer adding additional strength training 2-3 times a week. As the boys and girls came around the final lap Hordinski had taken over the lead, followed by Fedec and then Kennedy. The girls were led by Gear, Sidney Oakes-Lottridge and Avery Scrabis.

The teams are headed out to Alva next weekend to start off the season at the Riverdale Invite.