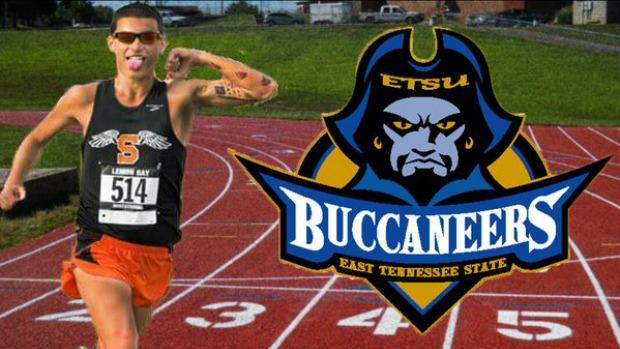 4A Cross Country Finals state champion and 4:17 1,600m runner Adam Bradtmueller recently announced he will be joining his former Sarasota teammate Zack Summerall at East Tennessee State University in Johnson City, Tennessee. We caught up with Bradtmueller to talk about the recruiting process, his decision and future plans.

Flrunners.com: What was the recruiting process like for you?

Adam Bradtmueller: The recruiting process was great for me. I had a fun time on my official visits meeting new people and seeing people that I already knew. It was not completely stress free, but I never felt too overwhelmed. It was very important to get it out of the way before track because this season I want to be focused on nothing but running.
FLR: Where all did you visit/consider?
AB: I took visits to three schools. Florida Southern, UNF, and East Tennessee State University. I had a great time on all three visits and they all had awesome programs so it was very hard to know that in the end I had to choose one.
FLR: After a winning a state title this cross country season and your success on the track, I'm sure you had some other in-state schools looking at you. Why the decision to head out of state and go to ETSU?
AB: I had some in state schools looking at me and I only visited one out of state school. The area and weather of Johnson City really sold itself to me and that was a big factor for me when I made my decision.
FLR: Your former teammate at Sarasota Zack Summerall is a freshman at ETSU. How big was his role in getting you up there and what did he say to you about the team and school?
AB: It is great knowing that I will be teammates with Zack again (the duo is back)! He had nothing but good things to say about the school and the guys on the team. He played a big role in getting me interested in ETSU, but when it came down to decision time I had to make sure that ETSU was a school that I wanted to go to because of the school and not just because Zack goes there.
FLR: Looking back at 2015, you ran 4:17 in the 1,600, you won your first ever state title in cross country, and now you are signing with ETSU. What's this year been like for you?
AB: This year has been awesome for me. It started out a bit rough with my injury struggles and the limited training that I did throughout track season, but I was very proud of how I was able to finish with a 4th place finish. Going in to cross country it was truly a blessing to win a state championship and I couldn't be happier with my season.
FLR: I know you really want to post some fast times on the track this spring. What are your goals for your last high school track season?
AB: I am very excited entering my last high school season and I hope to do big things. I don't want to lay out time goals, so I am just focused on staying healthy and getting ready to run fast.
FLR: What will you remember most about your time at Sarasota?
AB: I will mostly remember the relationships that I have developed with my coaches and teammates at Sarasota High. I have had a blast these last four years and can not even begin to explain how proud I am to call myself a Sota Boy!
FLR: What can ETSU fans expect to see from Adam Bradtmueller in the future?
AB: People can expect to give it everything that I have during my time at ETSU. I am really looking forward to working together with my new teammates and meeting some of the guys from the fairly large recruiting class that Coach Watts has been putting together.
FLR: Finish this sentence. Adam Bradtmueller is ______.
AB: Adam Bradtmueller is EXCITED!