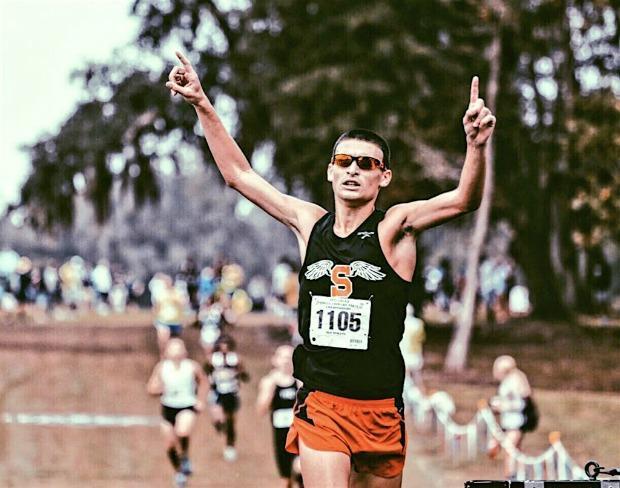 The 2015 cross country season brought us memorable performances, upsets, first time state champions, and continued the history of sending Sunshine State athletes to national meets. Now, we want to know who you think had the best season and is most deserving of our Athlete of the Year honors. Vote below from our five boys candidates. Voting closes Sunday at 11:59 p.m. and we will announce the winners on Monday! (Photo By Cedric Gillette)

Bradtmueller (pictured above) finished first in seven of his ten races including wins at the district, regional, and 4A Cross Country Finals. He ran a new personal best of 15:23.70 to place second at Pre-State behind fellow finalist Steven Cross. The Sarasota standout just missed making Foot Locker Nationals coming in 12th.

This fall Cook finished in the top ten in nine of eleven meets including the 2A Cross Country finals where he picked up the first individual state title of his career and guided the Saints to their third straight team championship. Cook was the second scorer (15th) at NXNSE for Avery Creek Running Club (Trinity Prep) which was the runner-up and advanced to NXN in Portland, Oregon.

It's hard to argue that anyone had a better year in the Sunshine State than Steven Cross. The 3A runner-up from 2014 captured the elusive state championship and advanced to Foot Locker Nationals in San Diego for the second straight year. Cross only lost one meet during the regular season and that came during the flrunners.com Invitational Race of Champions when he was beat out by Noah Perkins by the narrowest of margins.

While most of the other runners on this list are used to the spotlight and headlines, Hindle did not. The Boca Raton Christian senior was 11th at the 1A Cross Country Finals in 2014. In 2015, he raced every single weekend and sometimes twice in one week. Of the 13 meets he competed in he was first in six of those and in the top ten in every single race except for the Foot Locker South Regional. The Lee University signee capped off his high school career with his first ever state championship, winning the 1A crown in a THIRTY second personal best time of 15:56.01.

Joshua Jacques is the only runner up for Athlete of the Year who did not win a state title in 2015. The 2014 4A champion, finished third at the UF Mt. Dew Invitational, Flrunners.com Invitational Race of Champions, and Pre-State and was conference, district, and regional champion. The senior finished 9th at the state meet, but bounced back just weeks later to place 8th at Foot Locker South and become the third Lyman boy to make it to Foot Locker Nationals in San Diego joining Teddy Mitchell (3x) and Nick Radkewich (2x).