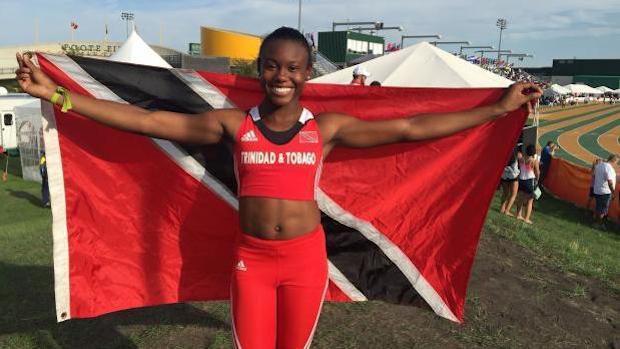 IAAF World Youth Championships 100m silver medalist Khalifa St. Fort has announced she will not be attending UCLA in the fall and instead turning pro. The decision comes on the eve of the CARIFTA Games in Grenada this weekend. St. Fort, who competes unattached and trains with Trinidad & Tobago Olympian and NBC analyst Ato Boldon in Miramar, Florida, recently won the 100m (11.39) and 200m dash (23.64), the two fastest high school times in the nation for 2016.

The standout sprinter ran a leg on the Trinidad & Tobago 4x100m relay at the senior level IAAF World Championships and earned a bronze medal which made her the first U.S. based prep to medal at worlds. St. Fort owns a personal best of 11.19s wind-legal from the World Youth Championships which is the 8th fastest time EVER by a female under the age of 18. She is currently in Trinidad & Tobago where she will sign her first endorsement deal with Flow, a telecommunications company based in the country, and will serve as their first ever brand ambassador in their 11 year history. Coach Ato Boldon says the timing coincides with the CARIFTA Games.

"She's doing it before CARIFTA  because they have a huge campaign coming for the CARIFTA Games and the Olympics. This starts the Khalifa brand moving. Win or lose CARIFTA, it's a win for her. Her value is in her brand, not just a race."

As for school, the senior will finish up her academic course load at St. Thomas Aquinas, take a year off, and then decide on her college path. The decision for high school athletes to go professional early is becoming more and more popular. Last year, we saw fellow Floridian Kaylin Whitney announce on her 17th birthday she was signing with Nike. At the end of  2015, Candace Hill of Georgia, who beat St. Fort at World Juniors in the 100m dash, signed a multi-year deal with ASICS. The most recent came this as week as World Indoor Champion and Bishop Gorman senior Vashti Cunningham announced her decision to go professional and sign with Nike.

St. Fort has not signed an apparel deal as of yet and has not hired an agent or agency firm to represent her. Boldon will act as her manager in addition to coach.

We will have more on Khalifa's announcement as the day goes on!