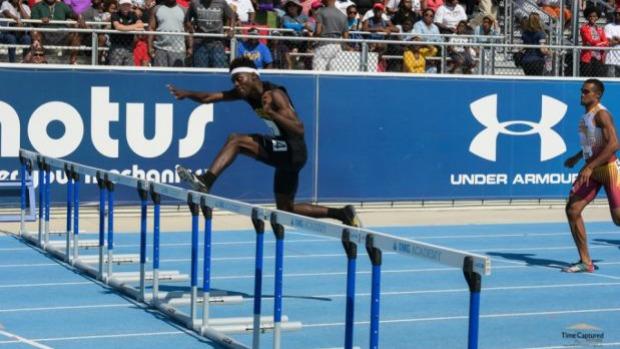 When the boys 110m hurdlers line up Saturday at Flo Golden South, the athlete with the most state titles might not be who you think. Sure, the field has Northeast junior Damion Thomas who owns a US#2 (tie) time of 13.42 one of the fastest times for a youth in the world and two state titles to his name. Then there is Braxton Canady, the senior, and University of Oregon signee Braxton Canady. Canady was the runner-up behind Thomas in the 110h and won the 300h for class 3A. Indoors, he was the runner-up at New Balance Nationals behind Grant Holloway. However, it is American Heritage senior McKinly Brown, who has two individual titles, and two relay golds from the Sunshine State to go along with a state title his junior year in the state of North Carolina.

Brown comes from a family of athletes, so running truly does run in his blood. His mother Barbara Smith was a 15x All-American mid-distance runner at Prairie View A&M while dad was a sprinter at St. Augustine College. His older brother Roy Smith was a state championship 110m hurdler for Northwestern in 2010. He says he was put into the sport following in their footsteps.

"I actually started running track when I was three.  I started at Moore Park With Northwest Express running with older kids because nobody was my age. I started doing the 80m hurdle when I was 11 or 12 as a way to get out of the 800 and 1500, even though they still made me do those events. What I love most about the hurdles is the fun and excitement it brings to practice everyday rather than just running on a flat track."
The class of 2016 standouts journey moved him to North Carolina for his first three years of high school. Training with close family friend, mentor, and Olympian Bershawn "Batman" Jackson and his track club "Run U Express" helped him blossom in not just the 110m hurdles, but Batman's specialty the 400m distance as well.
"Training with an Olympian was fun. He had a lot of other training partners so it was good to have a lot of competition in practice. Running with them they always told that now I don't have to worry about running against people older or faster than me cause I do it everyday. Batman showed me that in the longer hurdles you can't go out there and just run without a strategy."
The American Heritage senior who has yet to announce his college decisions says the 400m hurdles are his favorite race, and that Jackson broke him of some bad habits during their years training together.

"When I first started running the 400m hurdles I used to spring and hold on but he showed me how to break down the race so it would become easier and I'd have a lot more energy to come home with."
While in the Tarheel state, Brown was 4th as a sophomore in the 300m hurdles and won the event as a junior. He moved to Florida for his senior year and joined the team at powerhouse American Heritage due to a relationship between his dad and coach Greg Barnes. He says the transition to a new school wasn't hard at all.
"I came down here in the summer and started playing football so I knew mostly everyone which was cool. We were a family oriented team throughout the year on the track. Coming in I knew we had a chance to win state if everything played out well."
Brown planned to run 36 seconds in the 300 hurdles at Louie Bing, but fell in the finals. The following week he strained his hip flexor and was sidelined for one to two months getting that straightened out. Florida Relays was when he knew he could have a standout second half to the year after running 14.2 in the 110m hurdles and splitting 47 seconds on the teams 4x400m. The senior went onto place first in the 300's at districts and regionals while coming in 2nd and 1st respectively in the 110's. His 36.93 set the tone for what would be a four title haul at the state meet. Brown captured gold in the 100m hurdles, 300m hurdles, 4x100m and 4x400m relays, to go along with a team title. He says it was the perfect end to his time at American Heritage.

"Winning state with my AMH, my coaches and the rest of the team was the highlight of my year. That's the goal of any team, but to come here in my first year at this school and do it is even better."

Since the state meet ended two weeks ago, Brown hasn't been vacationing, he has been putting in work. At the South Florida Track & Field Showcase May 19th, he clocked a US#4 time of  52.45 in the 400m hurdles, his first race at that distance this year. He will compete in both the 110m hurdles and 400m hurdles at this weekend's Flo Golden South and says what makes him such a strong hurdler is his 800m background and passion for the sport.

"I come to practice ready to work and get the workout over with. Whatever my coaches give me as a workout, I buy into it because I know it is going to work.I'm not worried about whose on the line with me. All I know is I'm going to have a lot of turnover between the hurdles and can get back on the ground faster than the rest of the field."

With automatic ticket to the Brooks PR Invitational in the hurdle races, he knows he is going to have to start the finals off on the right note, and leave a lasting impression.

"I'm really looking for a PR in the 110's. I don't really like them that much, but I'd love to get that golden ticket to go to Brooks PR because I've been training hard all year. To get that ticket would be pretty amazing."