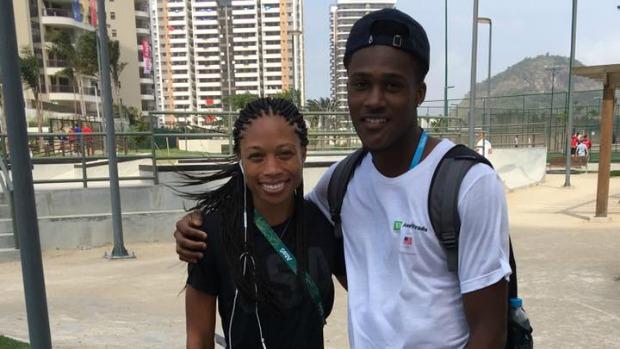 Northeast High School senior Damion Thomas is one of the top hurdlers in the country and one of the best in the world. Thomas is in Rio De Janeiro, Brazil at the Olympic Games, but he's not competing. He was selected at part of the TD Ameritrade Olympic Hopefuls program, which sends promising Tokyo 2020 Olympians, to the games for a week of mentorship, training opportunities, and a look at what it is like to be in the best environment in all of sports. Thomas is accompanied on the trip by his father and coach, Damion Thomas who says when they found out they were selected the choice to go was a no brainer.

"They said they got a list of up and coming athletes across the country in different sports from from some U.S. Olympic performance group. Then they went through the list and did research on the athletes then selected them. There wasn't anything we had to do. We just got a call back in November saying he was selected and if we were interested. It was the easiest decision we ever had to make.

The pair already attended the opening ceremony and Coach Thomas says they have a loaded itinerary between now and Wednesday.

"We are going to beach volleyball, swimming, gymnastics, Olympic Park to hangout, breakfast with Chaunte Lowe, Christ the Redeemer tour, Sugarloaf tour, and tours of the other Olympic venues."

Take a look at some of their photos from social media on this amazing experience!