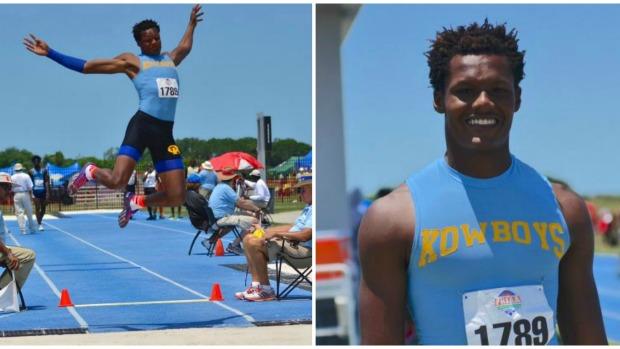 (Osceola jumper and FSU signee Carlos Becker is one of ten nominees for our Boys Athlete of the Year. Photo by Donald Lamb)

Want to have your say in who is named the Florida Boys Track & Field Athlete of the Year? We narrowed it down to the top ten performers from the 2016 season. Now it is time to vote. Learn more about the nominees and select who you think deserves this honor. Voting will close Sunday, July 31st, at 11:59 p.m. The fan selected winner along with our choice for Athlete of the Year will be named on Monday, August 1st.

Carlos Becker - The two sport-standout who signed with FSU for football showcased his athleticism for the Kowboys in 2016. Becker was in the top fifteen in the state in the 110h (14.17) and triple jump (46'10"), but it was the long jump where he brought home his first state title in any sport. Becker leaped a state leading and US#6 25'0 to win the 4A Region 2 Championship, and followed that up with a mark of 24'8" on his final attempt to claim the 4A crown.

Adam Bradtmueller - Sarasota senior Adam Bradtmueller is the first of two distance runners to make our final vote for Boys Track & Field Athlete of the Year. Despite, racing in limited competition, the ETSU signee stepped up and proved why he is one of the best in Florida. He ran a FL#2 3,200m time of 9:10.15 to win Florida Relays as well as a regional title and 4A state championship in that event. In the 1,600m, arguably his best event, he improved on his 4th place finish at state from 2015, by running 4:18.47 for third place. Bradtmueller also anchored Sarasota High School to a third place finish in the 4x800m relay in one of the state's toughest classifications.

Brandon Cachon  - Cachon, an UNC signee , did it all for Barron Collier over his four years in the blue and white. 2016 was no exception. The senior ran the 800 at the Pepsi Florida Relays to improve his speed in the 200 and 400 and clocked a time of 1:55.13. That showing earned him a spot on the team's 4x800m relay which he anchored to a 3A state title. He added a championship in the 400m and was runner-up in the 200m dash, guiding Barron Collier to a runner-up spot in the team standings. Cachon was second to Tyrese Cooper at Flo Golden South in the 400m dash, but earned a trip to Brooks PR in Seattle where he was third against the nation's best quarter milers.
Eron Carter - Another two sport standout, Carter, who will play football at Virginia Tech, was the top thrower in the state of Florida. Carter, and fellow football prospect Jarez Parks (class of 2017) could have both made a case for who was the best, but pushed each other throughout the season. At the end of the year, the Palatka senior was the state leader in the discus (195'0") and tie for the shot put lead with Parks (59'7"). Carter won the 2A discus state championship and was runner-up in the shot put in 2016. He ends his career with three state titles.
Sean Clarke - Clarke, a University of Pennsylvania signee, won his third straight 4A pole vault state championship. The Lyman Greyhound senior won all but one of his nine meets and set a new personal best mark of 16'3" which puts him inside the top ten all-time in the state of Florida.
Tyrese Cooper  - Cooper was not only one of the top sprinters in Florida, but in the nation this season. The freshman at American High School set freshman national records in the 100,200, and 400m dash with times of 10.46, 20.46, and 45.69. At the state meet, "Smoke" carried the Patriots on his back winning the 2 and the 4, finishing 2nd in the 100, and anchoring the 4x400m relay team to a victory (they were later DQ'ed due to an ineligible runner). In the postseason, Cooper won the Flo Golden South 200 and 400m races before duplicating that feat at New Balance Nationals Outdoor. He ended his 2016 record setting season by breaking AAU Club Nationals age group records in the 100, 200, and 400 and helping MGX win the 4x400m relay.
Caleb Pottorff  - Pottorff didn't attend a powerhouse program in Lincoln Park Academy, but he showed that he was one of the best distance runners in the state, running a Florida best 9:11.85 to place 11th at the Arcadia Invitational, and then run the best 3,200m of the evening at the state meet, 9:16.39, and his first state championship. The rising senior was the 1,600m runner-up at the 2A state championship with a time of 4:23.27 and improved on that one week later with a new PR of 4:16.07.
Tristan Schultheis  - Schultheis, a University of Miami signee, jumped 7'0" on four different occasions and cleared a state leading and US#6 (tie) 7'2" at the Astronaut Invitational. The mark is tied for second ever in Florida history only behind Sam Hill of New Smyrna Beach's 7'2.75" in 1992.
Anthony Schwartz - Schwartz was part of a dynamite American Heritage program, but the sophomore showed he belonged scoring 20 points as an individual at the state meet, winning both the 100, and 200, and anchoring the 4x100 and 4x400m relays to respective gold medals. Schwartz times of 10.26w and 20.76w rank US#6 and US#8 for the year. Following the regular season, Schwartz was invited to the adidas Dream 100 in Boston where he finished second and followed that up with a runner-up finishes in both the 100 and 200m behind Tyrese Cooper at the AAU National Club Championships.
Damion Thomas  - The Northeast High School rising senior went undefeated in 14 races this season. Thomas, who is one of the top hurdlers in the country, ran 13.32w to win the CARIFTA Games before going 13.42 wind-legal to win the regional championship. Thomas continued his dominance by winning his second straight 3A state championship and then besting the field at Flo Golden South.  The postseason continued as he was the Jamaican Junior Trials 110mH champion earning a trip to Poland for the IAAF World U20 Championships where a hurdle mishap knocked him out of the semifinals and a shot at a medal.