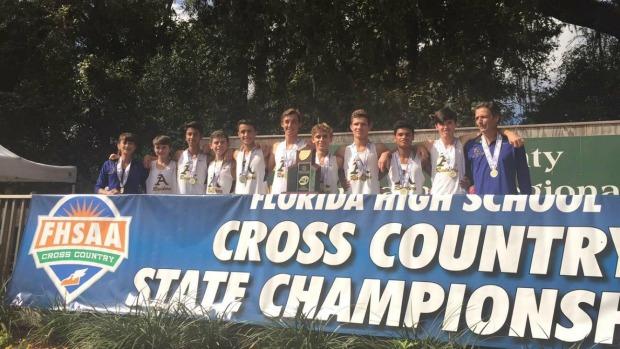 Of all the classifications nobody is favored to win more than the boys of St. Thomas Aquinas. The 2015 4A state champions return five of their top seven and have an incredible 1-5 split of 21.89s!  The top five for the Raiders may be set in stone, but after that  will be a battle between numerous runners. Coach Joe Hazera gives us the scouting report on this year's squad.

How did your team fare last season and what did you take away from 2015?
Our team was fortunate to have everything go right against multiple quality teams at the 4A XC State Championship in 2015.  The boys went through the season focused solely on getting as good as they could get and did not concern themselves with the competition.  We believe that kind of focus is required, eliminate all distractions and concern yourself only with what you can control.
How is the team looking this year?  What are your tentative top five and top seven?
At the present time we are healthy, focused and working hard.  We return five of our top seven from our state championship team that obviously want to defend their title and understand what that task entails.  Our top five are led by our Captain - Pierce Statham along with Sean Breslin, Nicholas Rischar, Ivan Donaher and Antonio Martinez.  After the top five everything is wide open with as many nine athletes competing for those last two spots.
What are the strengths of this team?
Depth!  Our individual order changed almost every race last year.  Over the past year, this team has developed the ability to consistently train and race in a tight pack.
What has the training been like? Have you gone to any camps?
We have been working on our aerobic base all summer.  In the Southern end of the state that means daily temperatures in the low 90's at 7:00am with the humidity usually over 80%.  Gradually increasing our mileage and working on hills when we can find them.  As part of the summer training, a group of our athletes recently attended the Brevard Distance Running Camp in North Carolina.  A great break from the hot, flat environment in which we train.
Any new additions who may contribute?   Any surprise non-returners?
We have multiple athletes returning, as well as a talented incoming freshman class that will be competing for spots on the team.  It would be unfair for me to single any of them out at this time.  As far as surprise non-returners, (not really a surprise) we lost one of our returning top seven to basketball. The correct decision for him but it is always tough to lose a talented athlete!
What are the team goals and meets you're keying for this year?
If we continue to do the required work and remain healthy we should be in position to attempt a repeat.  Along the way, we are excited to see how we measure-up at Mountain Dew and Pre-state.  Considering the effort and dedication required to get through the long season and compete for championships, any goals for post-season competition will be discussed at a later date.