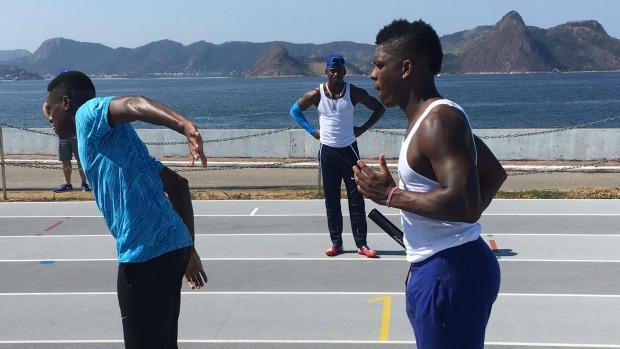 The Team USA men's 4x100m relay will face off against defending gold medalists Jamaica at the 2016 Olympic Games in Rio with the fastest sprinters from both nation's coming together and gunning for the top spot.  Baylor Associate Coach, Mike Ford, who coaches Trayvon Bromell, gave us an inside look at Friday's practice in Brazil.

Former Boone High School and FSU Seminole sprinter Marvin Bracy hands off to University of Tennessee sophomore Christian Coleman. Bracy could possibly lead off the relay with Coleman filling in for Justin Gatlin in the opening rounds.

Tyson Gay who used to train in Clermont, Florida and was the reason for Team USA relinquishing it's silver medal from the 2012 London Olympics, will have a chance to redeem himself in Rio. Gay was working on handoffs to Bromell and could be the third leg, with Bromell anchoring the red,white, and blue. Mike Rodgers is also a member of this team and he could run in the third spot in the final as well.
Jarrion Lawson of Arkansas is also in the relay pool, but the USA champion in the 100, 200, and long jump, will most likely not run in the relay unless absolutely necessary.
Round 1 of the men's 4x100m relay is Thursday, August 18th at 10:40 a.m. EDT.

Taylor Dutch of Flotrack caught up with Bracy, Bromell, and Justin Gatlin last week at the team's relay camp in Houston to discuss the team's chemistry, chance in Rio, and more.