Loading
(Del Re's last race of her 2016 season at the Palm Beach County Championships where she ran a new course record time of 18:05.59)

Jupiter's Ali Del Re didn't toe the line for this week's 4A District 10 Championship. Instead, Del Re, ranked third in 4A, and the fourth best freshman in the state of Florida was on the sidelines, wearing a boot on her right foot, and cheering on her teammates after a stress fracture in her right ankle caused her to cancel her postseason plans.

Del Re's father, Joe, told flrunners.com that his daughter tweaked her ankle the week prior to the UF Mt. Dew Invitational causing her to sit that meet out.

Being the competitor that she is, she wanted to prove herself against the top runners in the state and competed in FLR17 where she placed 6th in the girls Race Of Champions with a personal best time of 18:04.38, where she says dad says the issue really came to light.

"Ali's had a stress fracture in her heel for the past month. She has been in pain since the Spanish River Invitational meet. She really hasn't trained since then and was really hurting at flrunners."

Hurricane Matthew derailed plans of a trip to Tallahassee and Pre-State, but it also gave her another week to rest and hope for the best.  At the Palm Beach County Championships, Del Re torched the course record in a time of 18:05.59, but that marked the end of her spectacular season. 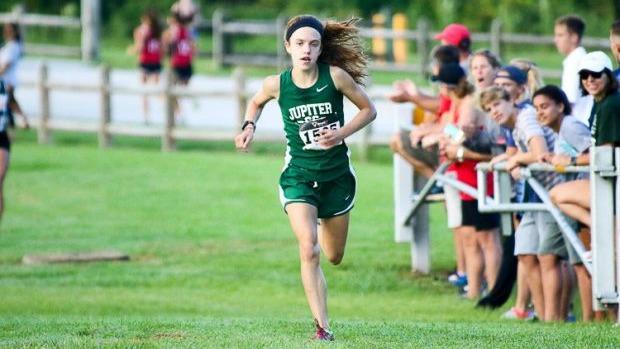 We caught up with Ali to talk about her high school XC debut, more about the injury, and her plans looking forward.

How long did you have the stress fracture for?

During the Spanish River Invitational my right ankle was really bothering me. That was about  a month ago.  I would try to rest it, but each meet after it was still hurting. I got an x-ray but they didn't see anything wrong so I continued to run with the pain. Finally, after the flrunners.com Invitational my dad tried taking me in to get an MRI, but the hurricane delayed it.
That also gave you time to rest up for the Palm Beach County Championships where you set a course record. Talk about that race.
Setting the course record felt pretty great considering my injury. I haven't really been running too much this past month because of my foot. On the day of the race I tried really hard to put it out of my mind and just run.
After that I am assuming you went to the doctor again forcing you to end your season before districts?
I had the MRI because my ankle felt really stiff and wasn't getting any better with rest. I found out the results the night before the county championship. My doctor advised me to wear a boot for approximately six weeks. Because it was the night before the county I decided to finish my season after that race and do my best before I took time off from running.
Three races under 18:12,  including two wins at the Spanish River Invitational and Palm Beach County Championship, and a bright future. How disappointing was it for you to end your season on this note?
It's extremely disappointing because I have been working so hard and wanted to show everyone what I was capable of.
What positives do you take from this injury?
I learned to just try and relax and stay positive for myself and my team. Now that I know what my injury is I am going to focus on what I can do and not on what I cant. Believe it or not, I was actually relieved when I found out that I had a stress fracture in my heel because for a while I didn't think my foot was going to get any better and that was frustrating.
What is your focus on now?
My focus now is to work on getting stronger for the upcoming track season. I will continue to do my core exercises along with yoga and I started a pool training workout today that I will do to keep my cardio up. I'm looking forward to the track season.