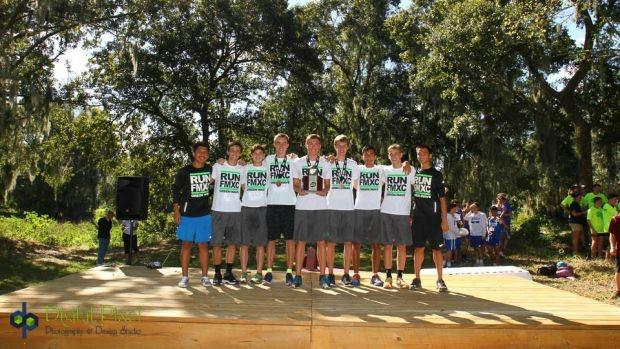 The Fort Myers boys came up short of a podium finish in 2015, finishing third. The team returns six of seven from last year with five of those being seniors. Evan Babatz (8th) and Josh Kennedy (18th) finished in the top 20 for the Green Wave and look to improve on those finishes in 2016. The bad news for Coach Yancey Palmer's squad is that 3A might be the most competitive classification on the boys side out of all four classes. We get the scouting report on this year's team.

I thought we had a great season. I was really pleased with our team race throughout the regular season, but then in the championship phase of training we did really well. We were able to get a win at both district and region, so that set us up with confidence for the state meet. At the state meet not many people thought we would perform in the top 7-8, let alone top 5 (which was my goal for our guys). But then when the results came out, we finished 3rd. That was  a great feeling, our guys felt proud of themselves.

Team? Looking?...well they look handsome as can be for distance runners. JK

We are hoping to match go one place higher this season, but as everyone knows, there are a lot of really good teams to beat first. So I am sure we won't be expected to place on the podium.

Our top couple are probably set, I say probably because the boys tease me that I once told a boy he probably should not set his 1600m goal that high, well...he showed me.   Lol

But we have a group in the top (Evan Babatz 12, Josh Kennedy 12, Sam Hordinski 12, and Nick Carpenter 10). Then our 5-10 spots will be dog fight. I am already dreading that decision I have to make at the end of the year, all our guys sacrifice for each other and the team. We are demanding in our commitment and expectations, but love all of them, but only 7 get to run at the state meet.

Our strength is in our numbers. We carry around 35 guys to meets, so the guys know if they are not racing hard and doing the daily work then someone behind them will cruise past. So our internal competition really helps, but the coaches know that can be a down fall to teams as well. We have to balance between friendships and teammates.

What has summer training been like and did the team attend any camps?

Our top guys are about 40+ miles right now, and will get to 55+ by the early October. We host a camp in Blairsville GA, in the Smokey Mtns. At that point I collected their legs and will return them mid-October when the we start to settle in for the championship season.  So right now they feel fast or sharp, but it gives me a chance to beat some of them in workouts. lol

What are the team goals and are there any meets you are really keying in on?

We try to race as hard as can in all our meets, sometimes we have certain sections of the course we want to focus on. For example, the first meet is really tight early on, so we want to pack up early and negative split from the mile to the end. I will ask them to not leave a teammate, in costs us some time in the season, but I think it pays off as the season unfolds.