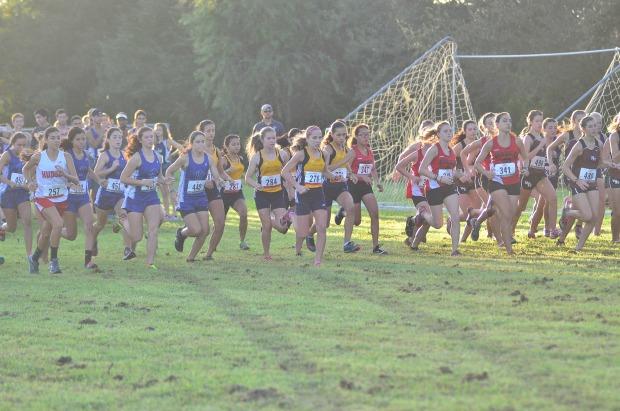 Hurricane Matthew threatened the Sunshine Athletic Conference or Pasco County cross country meet on Saturday. The close brush with the Category 4 hurricane forced cancellations of athletic event all over the state. The early season meet, the Wiregrass Ranch Run with the Bulls did get cancelled in the wake of Tropical Storm Hermine. The Citrus/Hernando County meet scheduled for last Thursday was postponed and dozens of Friday football games got re-scheduled. Fortunately, the storm had passed by Saturday morning, leaving a soggy, muddy course that spattered just about every runner on the course but nevertheless, the meet went on.

The course at Wiregrass Ranch starts down what was a very muddy grass straightaway, winds counterclockwise around a small pond before runners come back down near the same area where they began. Next, runners loop around the football and baseball stadiums and run down the asphalt approach into the school, near the one-mile mark. Runners then wind around the school before picking up the small pond again. Near the football stadium a second time marks the two-mile point and then runners make a second loop but cutting in front of the school and not making the lap around the pond before coming right up the starting straightaway as they hit three miles. From there, it's a short burst across the track and down the football field for the finish. 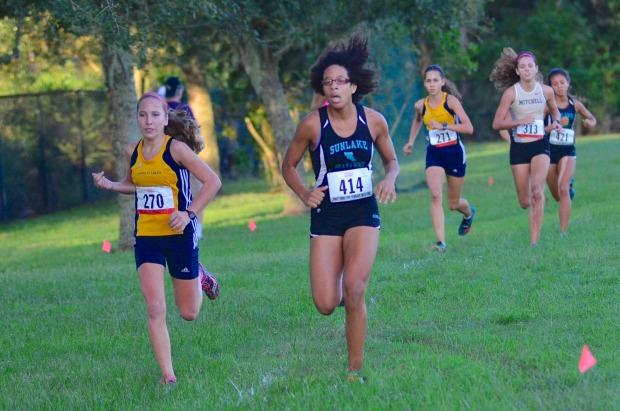 The girls went off first and it was a familiar duel between Sunlake's Jamila Cardwell and Land O' Lakes' Natalie Abernathy. Coming back from the first trip around the pond, the pair put three seconds on the rest of the field. Through the first mile and coming out for the second trip around the pond, Abernathy hung eight seconds on the rest of the field as teammate Estefania Acosta moved into second. Acosta had a good 10 seconds on Cardwell and then a big gap with a cluster of runners, Grace Phillips, Isabel Oliveto, and Julia Blankenbaker tried to reclaim ground.

Those same three runners spread out in that order as they came into the stadium at three miles. Abernathy took first in 19:45.10 with Acosta in second at 20:04.5. Cardwell took third in 21:04.2 and Phillips moved into sole possession of fourth at 21:18. 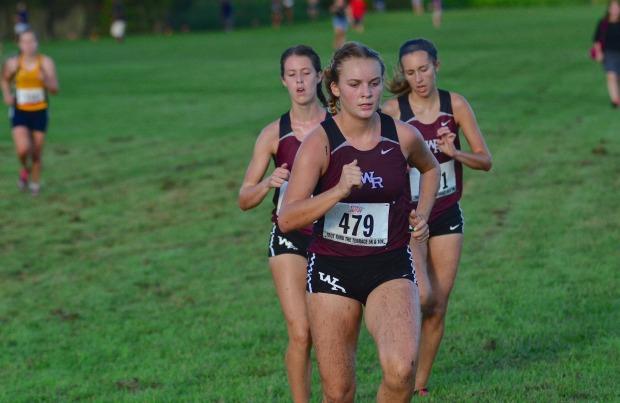 Then the Wiregrass girls came in. First, it was Blankenbaker in fifth at 21:33.10. Then Mitchell's Oliveto and Sunlake's Justine Ruleman, then the rest of the Wiregrass team blasted through, Reis and Kylee Ehman, Lauren Payne and Abbie Dodge. There was no question who would capture the team title. The Bulls won it with 38 points, unseating defending conference champs Land O' Lakes (52). It made it the eighth girls team title in the last nine years for coach Don Howard and his Bulls. 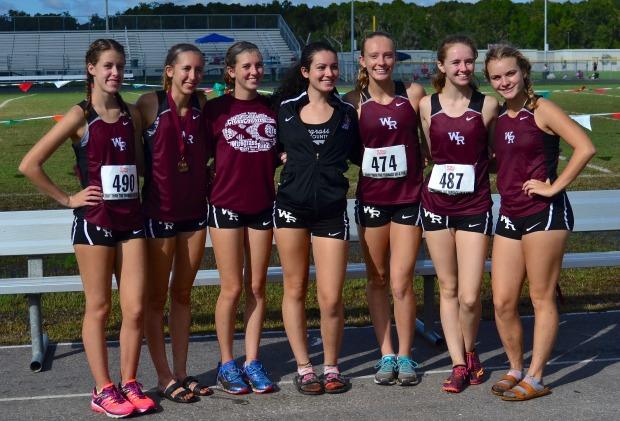 "We came into today knowing Land O' Lakes was going to go 1-2 (individually), our goal was to put our five scorers in front of their number three (runner)," Howard said. "We won Flrunners with no one in the top 15 and we knew if it worked there, it would work here." 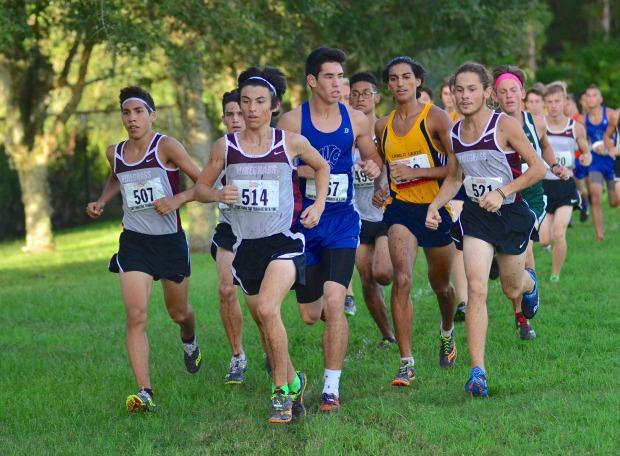 The boys race was a lot closer, at least for the first couple miles. It was a very tactical race in the early going, a thick pack of boys just barely pulling the field in front of them. Wesley Chapel's Dominic Moreno, the defending conference champ, was just in front as the group took the first loop around the pond. Wiregrass' Joey Salerno moved in front prior to the one-mile mark. 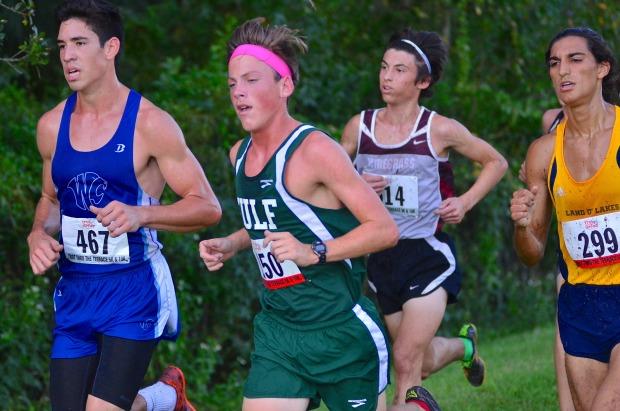 Taking the big loop around the school, Gulf's John Jessup moved into the lead with Land O' Lakes' Alex Normandia on his tail. The pair had separated from a trailing pack of six that had 15 seconds on the rest of the field. The second trip around the stadiums and inside the pond, saw Normandia make a big move and pull out of range for any runners trying to catch him. 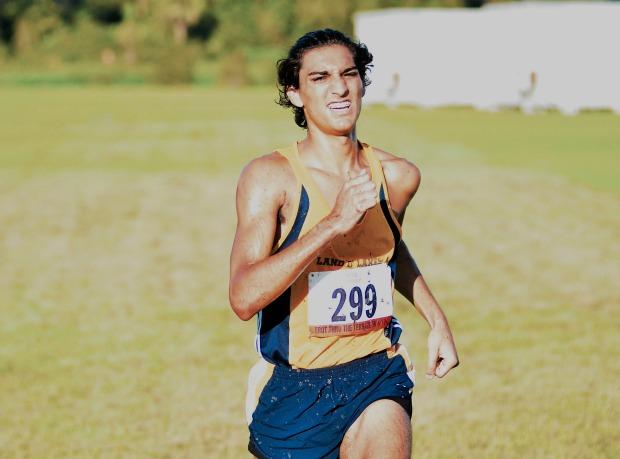 Normandia came into the stadium unopposed and broke the tape at 16:47.50. Jessup grabbed second in 17:02.5. Moreno and Salerno got into a foot race coming into the stadium and Moreno won it, taking third in 17:16.40. Salerno settled for fourth in 17:18.50. Again, the strength and depth of the Bulls began to show as Kevin Jaquez took sixth overall, Giovanni Duran grabbed eighth, Carlos Cruz and Christian Velez took 12th and 15th, respectively and it locked up the team win for the Bulls. 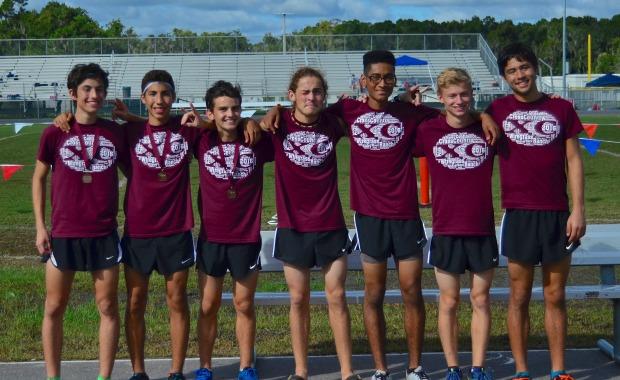 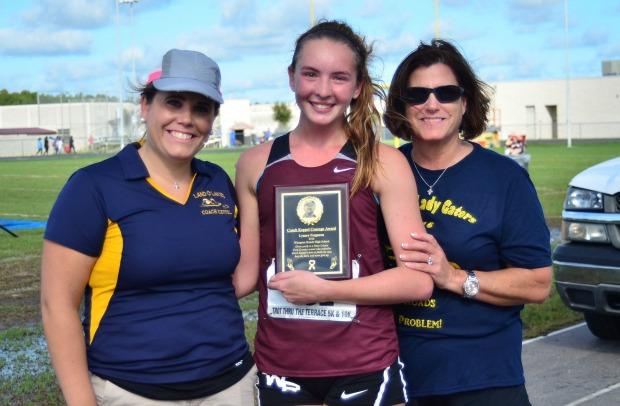 A special award in just it's second season, the Coach Keppel Courage Award was given to Wiregrass Ranch's Linsey Ferguson. Ferguson endured a battle with cystic fibrosis to remain a part of the Wiregrass team and Howard called her, "one of the most positive and upbeat" runners he'd ever coached.