(Damion Thomas ranked as the #2 110mH in the class of 2017 announced a final four of North Carolina, South Carolina, Southern Cal, and LSU and gave his thoughts on each one of the prospective suitors.)

Northeast High School senior Damion Thomas is one of the most coveted hurdle prospects in the country. At last year's 3A Region 4 Championship, Thomas ran a US#4 time of 13.42, the second fastest time of any junior behind only Trey Cunningham of Alabama.

He was undefeated this season through the prelims at the IAAF World U20 Championships, but unfortunately stumbled over a hurdle in the semi-final and did not advance to the final. 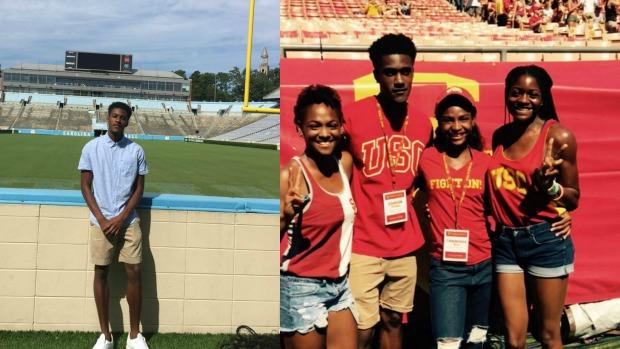 Where have you visited/plan to visit?

I have already taken two official visits to the University of North Carolina and Southern Cal. Halloween weekend I plan on visiting South Carolina. My last visit will be LSU the weekend of November 5th. I am only taking 4 visits.
What do you like about each of the above schools?

The four schools I chose to show official interest in were North Carolina, South Carolina, LSU and Southern Cal. Each one of these schools has my major as well as a high priority in getting my degree. More specifically the schools I have chosen are great at producing collegiate hurdlers and more importantly professional hurdlers.