Loading
Bailey Hertenstein smashed the Holloway Park course record in a time of 18:13.83 with freshman teammate in second place with a time of 18:58.22. On the boy's side it came down to a sprint to the finish with Jordan Gonzalez of Sarasota giving the Sailors a regional champion for the second straight year. Steinbrenner girls dominated with 46 pts. while the Lakewood Ranch boys edged out Newsome by four points 85 to 89. Andy Warrener recaps all the action from 4A Region 2.

Area cross country teams took to the course at Holloway Park in Lakeland on Friday in some of the cooler weather runners have encountered this season, albeit on one of the toughest courses in the state. The course at Holloway starts up a grass straightaway and hits a Florida-steep hill just 300 meters in. It then winds back where spectators get a look at the runners as they approach the one-mile mark. Then runners wend through the back trails before emerging near the three-mile mark for a 180-degree bend over grass for the last few hundred meters. It was a breath-taking event as eight races, staggered by just 20 minutes went off in succession. 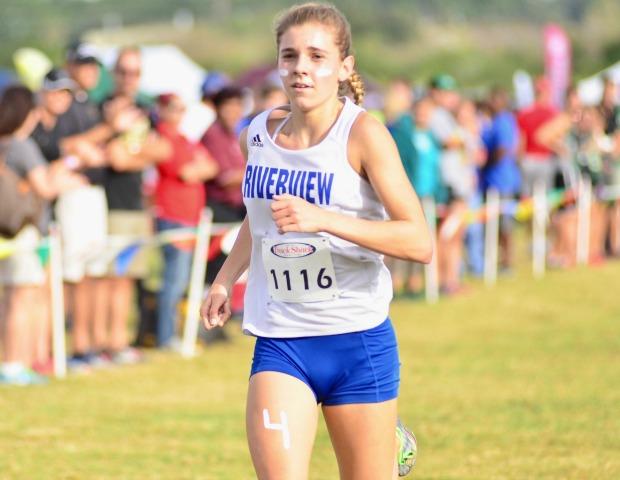 The 4A races were stuffed into the mix. Both boys and girls races were show-stoppers. First up were the girls. As was expected, Riverview's Bailey Hertenstein got out early and big and never looked back. Sound familiar? The bar just keeps getting higher for Hertenstein and somehow the junior keeps finding ways to raise it. On Friday, Hertenstein continued her string of meet victories that encompass almost two full seasons. Yet, on the course at Holloway, Hertenstein set a mark that is sure to send shockwaves across the other three Class 4A regions as states looms just a week away. The previous course record for girls at Holloway Park was Hertenstein's own 18:40.70 from the Seffner Christian Invite in September. 18:40? Ha! Hertenstein broke the tape on Friday at 18:13.82, demolishing the meet record only six weeks old. It's a record that could hold for some time as it's nearly 30 seconds better than the next best mark from any other runner, that is, unless Hertenstein breaks in next year.

"I'm trying to get back to state and defend my title," Hertenstein said. "The first mile I went out too fast, the second mile I went too slow - I have to learn." 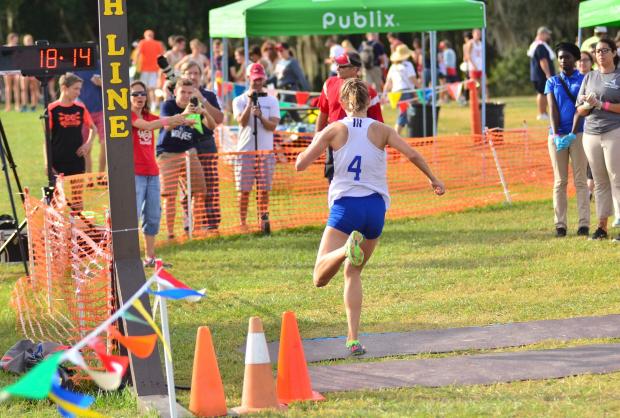 Humble words from arguably the most dominant runner of either gender this season...and last season. Hertenstein was quick to praise the efforts of freshman teammate Alyssa Hendrix. Hendrix tailed Hertenstein for much of the race, pulling the trailing pack of girls behind her. As Wharton's Rania Samhouri and George Jenkins' Emily English jockeyed for position. Coming out of the back trails, near the three-mile mark, another freshman entered the fray. Steinbrenner's Lydia Friedman moved into the race for third and got past both Samhouri and English to take third. Hendrix took second in 18:58.22.

"My dad looked up the virtual meet and it had me behind Rania (Samhouri) and she beat me at count (Hillsborough) by a couple seconds," Hendrix said. "I wanted to get her, she was right there and I knew I had to beat her to get second." 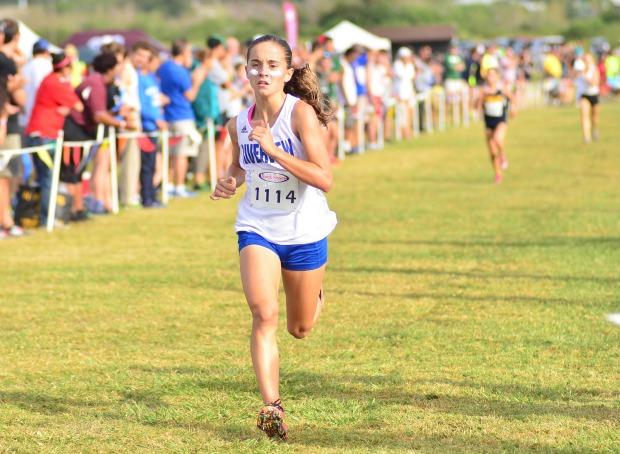 Surging into third was Steinbrenner freshman Lydia Friedman, blowing the doors off her 19:25 PR from September.

"All I know is I love this course," Friedman said. "What really pushed me was this girl (Laura Jones of Plant) behind me kept trying to pass me. Every time she got near me, I just ran away."

Hendrix and Friedman made resounding statements Friday, especially on such a tough course. 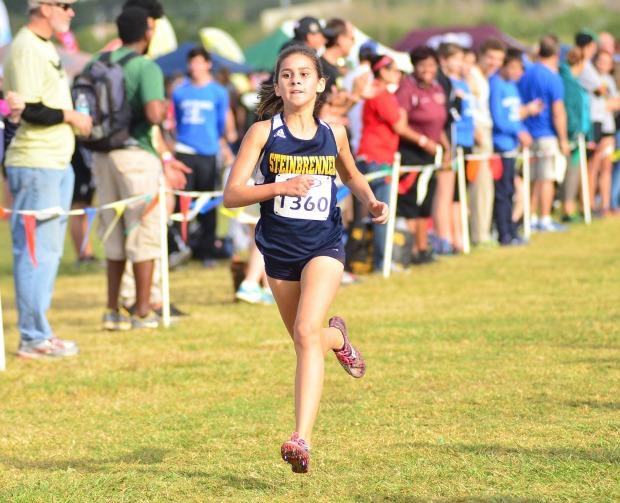 "She (Friedman) didn't know this was supposed to be a hard course," Steinbrenner coach Ladd Baldwin said.

Jones took fourth (19:07.30) and Samhouri fifth (19:13.82). Steinbrenner's Alexandra Strauman took sixth in 19:18.07 and then teammate Alexandra Perri came in ninth, Brooke Santiesteban 13th and Brieanna Rekow 15th. All five Warrior runners in the top 15. Team title? Yessir. The Warriors won it with a 46. Runner up Plant was back at 92 and still way out in front of Sarasota with 150.

In the boys race, Durant's Haltom Fliegelman led a large group of boys waiting for someone to breakaway through the first mile. By the second mile, things started to spread out and when runners emerged from the trails, near three miles it was Fliegelman traied by St. Cloud's Tristen Montalvo and Sarasota's Jordan Gonzalez. Gonzalez, with his longer framed started his kick and moved past both Fliegelman and Montalvo and won it in 16:36.48. Montalvo got past Fliegelman for second in 16:38.22 with Fliegleman right there in third at 16:38.58. 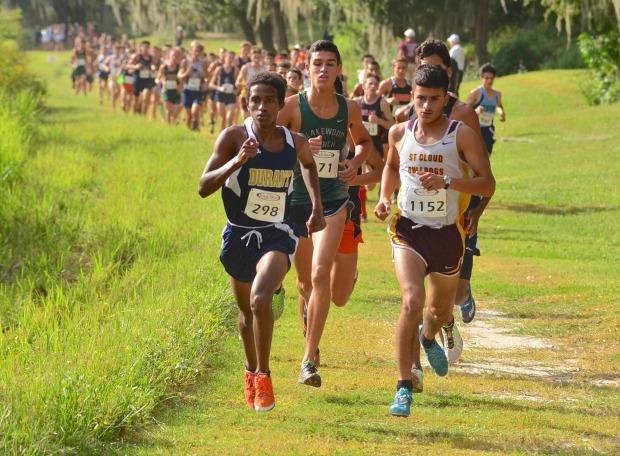 "We knew what we were going to do, hang and bang," Gonzalez said. "I wasn't planning on catching him (Fliegelman) but the crowd pumped me up and I kicked it out at the end." 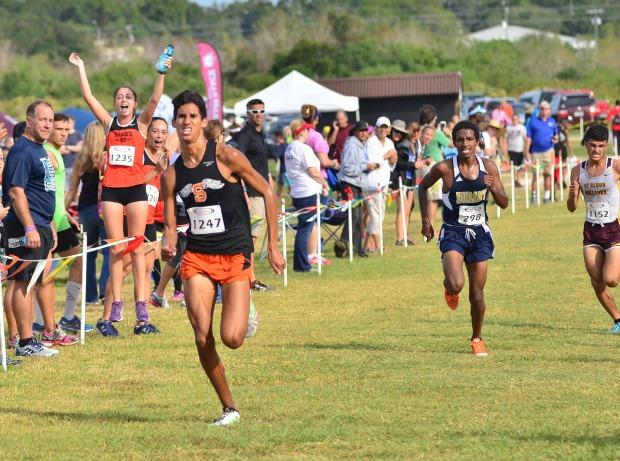 Lakewood Ranch's John Rivera might have slipped to fifth but he led the Mustangs to the team title with 85 points, edging Tampa's Newsome (pictured below) by just four points. 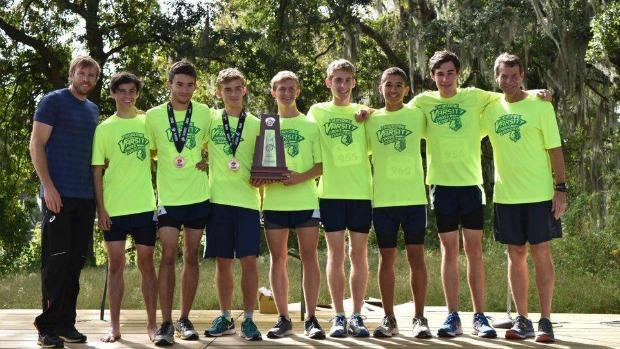