4A 100/200m state champion, Flo Golden South, and Dream 100 winner Amuru Patterson announced she will join a stellar recruiting class at the University of Miami. Patterson's personal bests of 11.59 from the Adidas Boost Boston Games and 23.65 from AAU National Club Championships both rank 10th in the nation for the class of 2017. 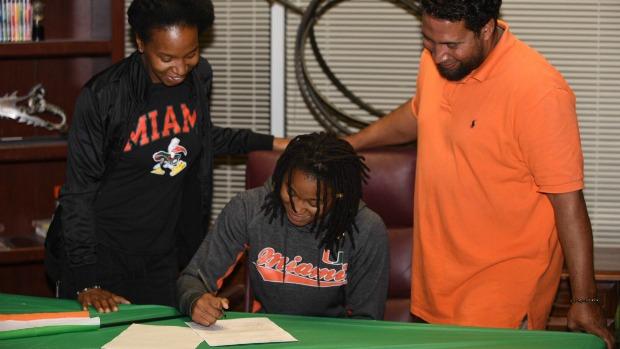 For me the recruiting process was very tedious in the beginning. Lots of phone calls from coaches and long conversations about their schools. Overall the hardest part was definitely telling the schools no. The easiest part was knowing what kind of coach I was looking for. The process taught me that not every coach is like my coach and not every coach is for an athlete like me. 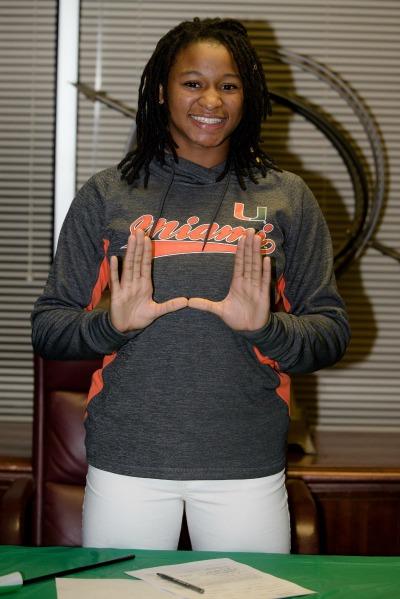 Where all did you consider visiting?

My official and unofficial visits were going to be Miami, Florida State, Tennessee, South Carolina, Mississippi State, Florida and Illinois.

Miami felt like home to me, I think a major part in that was because of the weather. I liked the campus  set up and size as well as the class sizes I also felt like I'd fit right in along with the other Cane track family members.

Were Kayla, Symone or Katia on your visit as well?

Symone Mason was on the visit with me as well. It was interesting to be around her since I hadn't seen her since states when we faced one and other in the 200m. I think we'll get along well and we will definitely push one and other.

Why the choice to be a little more low key about the decision?

I'm not big on putting my business out there. I didn't want anyone to influence my decision in any way. I take the schools and the process very serious. It's a privilege to be recruited by so many. When I knew where I was going for sure I didn't want to showcase all the other schools I knew I was going to say no to, I feel that it is disrespectful to them and my chosen school.

What was your bond like with Coach Deem and the rest of the girls?

Coach Deem and I have been developing our relationship since the Dream 100, although there was no official contact she did come and watch me race. It meant a lot to me to know she was there. When I was able to officially speak with her we held conversations for quite a while, I appreciate the one on one contact and her efforts to recruit me. Aside from the recruiting part I feel Coach Deem really cares about my well being. As far as the rest of the girls? We got along really well, it's as if i was already a Cane!! Their pride in their school was definitely inspiring.

Why the decision to sign in the early signing period?

I wanted to rid myself of the stress of the process. I need all of my attention to be on graduation and training for track.

Do you feel a little under the radar?

My coach says, "I should walk soft and carry a big stick." All that transpired over the season was a surprise to most, so I was definitely an afterthought. My Coach has crazy ties to track in this state, he seems to know everyone. He spoke of me to his coaching buddies, and  even predicted my victories. I think, I made them take notice, and  in turn, he made me a believer. The young ladies that were consistently on the radar have been  household names since 5th or 6th grade. I started sprinting in the 9th grade, so although unrecognized my upside is greater than most. Coach Wise also spoke of a conversation he had with you on the walk to the Dream100 Track in Boston. In which he discussed his predictors and what the outcome would be.

What are you looking for most about being a member of the Hurricanes?

One of the main things I look forward to is being coached by one of the greatest if not the best female track and field coach in the world. It's an honor to be a Canes choice and it's an honor to chose the Canes in return!!

In 2016, she wasn't the athlete being talked about across the nation, but you could argue she was the best sprinter in Florida. Patterson won the 4A state championship in the 100 and 200m dash and the Flo Golden South in those same events. The speedster then showed she was one of the best in the U.S. by winning the Adidas Dream 100 in Boston and the 200m dash at the AAU National Club Championships. 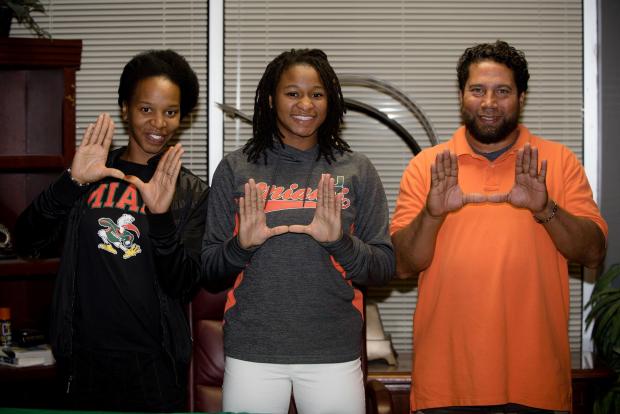 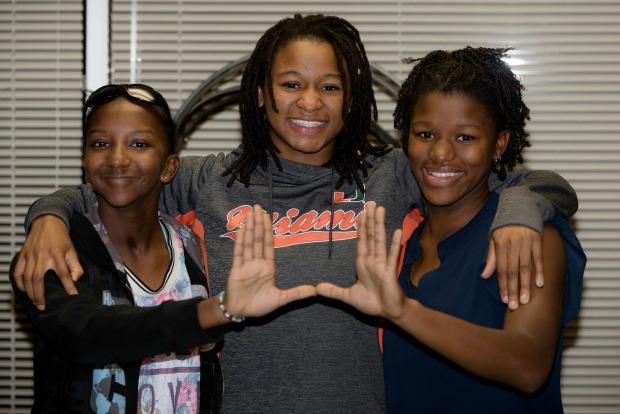 Personal Bests (By The Numbers)