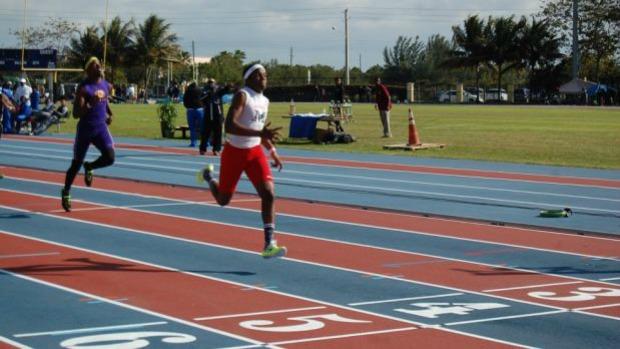 Louisville sophomore quarterback Lamar Jackson (seen here in purple) is one of three finalists for the Heisman Trophy presented to the top athlete in college football. Jackson's credentials include the first player in FBS history with 3,300 passing yards and 1,500 rushing yards in a season and only the 6th player in FBS history to rush and pass for 20 touchdowns in the same season. However some of his speed and elusiveness can be traced back to his high school days in Boynton Beach where he also ran track.

A quick look into his athlete profile shows he competed in several meets including the Louie Bing Classic in 2015 where he did both the 100m and the long jump.

Boynton Beach class of 2016 sprinter and current University of Cincinnati wide receiver Thomas Geddis knows Jackson well dating back to their youth football days and says he is worth all the hype.

"I remember he was the second leg for his 4x1 relay team & gave them the lead leading into the race, very fast and great technique type of runner. He always gave his team the lead on the back stretch of the rest. I used to play against him every year doing little league football when he played for Pompano Cowboys & North Broward Raiders. I believe track speed played a big part in both of our football success because it gives us an advantage to out run or opponent, but there is a difference between track speed & football speed. Lamar Jackson has the wheels for both."

Geddis acknowledges the talented finalists for the Heisman award, but believe it should go to Jackson.

"Yes, I believe he deserves to win the Heisman. He had an unbelievable season and put up great numbers that no other college player this year has done. Also, like you you said since we from the same city and I am behind him 100 percent."

When I asked Geddis who would win a 100m dash between the two if they had to go tomorrow. The 10.83 sprinter was reluctant at first, but eventually admits he is the the bet of the bunch.

"If we have had a race tomorrow it will be a close one to call. Oh okay, I'd get him by a bit."

Jabrill Peppers of Michigan who will go head to head with Jackson in the Heisman voting was also a standout on the track. Peppers, who graduated from Paramus Catholic in New Jersey in 2014, was a 4x  NJSIAA State Meet Of Champions winner doubling in both the 100 and 200 as a junior and senior.

Best of luck to Lamar in his quest for a Heisman Trophy. If he fall short, lets hope it goes to another trackster.