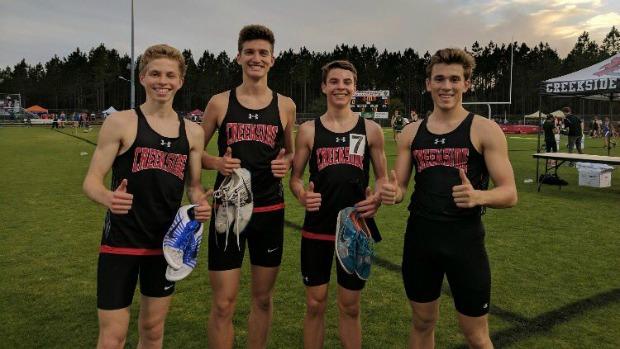 What started as a normal Friday night in St.John's County, turned into a historical evening for the Creekside HS boys distance team. As the Creekside boys toed the line in the boys 4x1600 relay, no one expected what was to come in the next 17:40.78. Creekside had the chance to run a fast relay time at their home track and they took advantage of that opportunity.

The lineup consisted of Stetson signee Reece Duff, Columbia signee Joseph Storey, and then followed by the two Florida Gator signees Nick Deal and Matthew Clark. It was Duff who took the lead leg and started it out with a solid 4:37 only a couple ticks off his personal best. He then handed the baton off to his senior teammate Storey who topped his season best by a second in running a 4:26. The baton then landed in the hands of Gator signee Deal who tied his personal best by running a 4:21. The final leg was Matthew Clark's and he ran an unofficial FL best at 4:14, as he motored his way to the finish line, that ended in a record breaking 4x1600 time in FL history. The Creekside HS boys broke the state record in the 4x1600 by beating the 2011 Charlotte HS team's previous state best of 17:40.83.

The most impressive part of all of this is the Creekside boys won the relay by a full minute and six seconds, as it was the Bertram Trail Bears who took second place in a time of 18:46.58. The Creekside Knights are coming off a cross country season where they won the 3A State Championship as they beat the Timberwolves of Chiles High School by ten points. The Knights also won the 2015 3A Cross Country State Championships as they nudged Chiles High School by ten points as well.

Eric Frank, head coach of the Creekside Knights, doesn't get the credit he deserves as he continues to produce great runners and great people. Frank will lose all four of his boys that ran the 4x1600, but they will all be attending and running at prestigious Division I schools, as yet again Creekside shows not only is their athletic talents good, but these young men exemplify academic excellence.