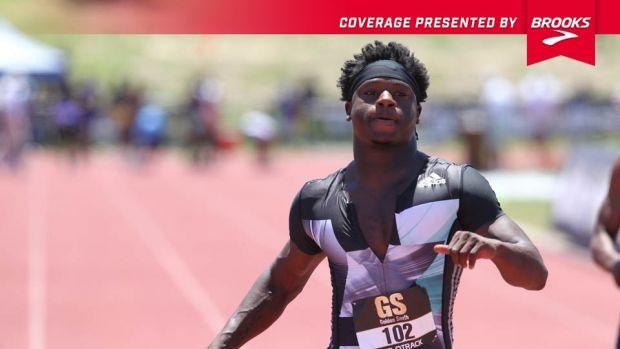 We spotlight sprinter Chauncy Smart who is poised to win the 100m title at the 2017 Brooks PR Invitational after finishing 3rd in 2016. Smart was the Florida 3A state champion, Flo Golden South champion, and was recently third at the Adidas Dream 100.

What does it mean to you to be invited for the 2nd year in a row?
It meant a lot to me to be invited a second year in a row because it shows me that all the work I've been putting in is paying off.
Last year you finished third in the 100. What did you learn from that race last year and what are the goals coming into this weekend?
I learned a lot from the race last year and I know way more now then I did last year. I know what to do and what it takes to win.
Over the past month you won Flo Golden South and were third at the Adidas Dream 100. How did that prepare you for Saturday?
Those meets prepared me for Brooks PR because my time showed me where I am at.
What specific workouts/training have you been doing this week and leading up to Brooks PR?
I prepared for this weekend just doing 200s, 150s, 120s, and 90s. I've been doing a lot of blocks and turn over workouts.

Last year you were the only Florida guy in the 100. This year you will race Terrence Horne and Taylor Banks of Miramar. Have you ever faced off against those guys?
I've raced Taylor Banks, but not Terrence.
Jamal Walton & Leander Forbes will run the 400 so Florida will have five guys there. How cool will it be to bond with guys from the Sunshine State again?

It will be really cool. We're already talking about how lit it's going to be.

The Low Down: Get To Know More About Chauncy

What music do you listen to before races?
I like listening to gospel and rap right before I get on the track.
If you were stranded on an island with three things what would they be?
If I was stranded on a island I would have a stick , some fire , and a phone.
What would you consider as your best or favorite race of all-time and why?
My best race was the 2017 state championships because I won a state title and it was very exciting.
What are some things un-running related people might not know about you?
I love to do magic tricks and I play the drums. My favorite card trick is find the ace and the disappearing handkerchief. I also have a floating card trick, but I'm not that good at that one yet.