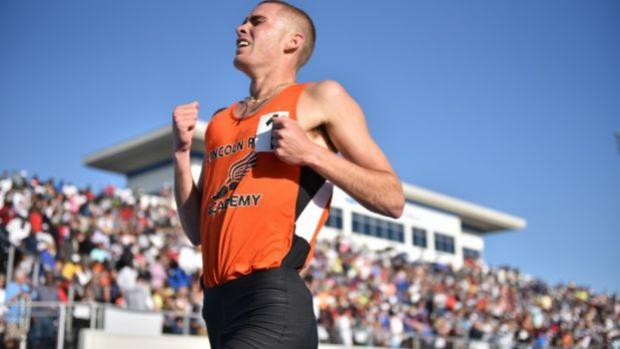 No boys distance runner in the state of Florida was more consistent than Lincoln Park's Caleb Pottorff earning him Athlete of the Year honors in the respective discipline. Pottorff came into the 2017 track and field season having earned his first Cross Country Finals state championship the previous fall. He says he had a few meets he was targeting early on.

"I had some big races that I wanted to compete well at and those were the FSU Relays and Arcadia Invitational," he explained. "To go to those races and compete to the best of my ability was just a huge blessing from God."

The FSU signee opened his 3,200m schedule on his future home track in Tallahassee and won the race in a twelve second personal best time of 9:03.44. Two weeks later in California he placed 15th in one of the deepest eight lap races ever assembled at Arcadia Invitational. More importantly he dipped below nine minutes, one of his season goals.

"Overall, my track season couldn't have went any better," he said. "Coming in I had a few goals that I was aiming to hit and breaking 9 was the big one, as well as going back to back in the 3200 was another one Lastly, I wanted to finish what I set out last year to do and that was to sweep the distance events."

After Arcadia, Pottorff steamrolled through the state series winning districts, regionals and his second straight 2A 3,200m crown. In the 1,600m he was a perfect seven for seven with a new personal best of 4:12.17 at the 2A Region 4 championship and another state championship the following week.

The distance standout told us  that knowing his 2017 track season allowed him to get our Boys Distance Events Athlete of the Year award is just another piece to the puzzle of his life.

" I came in with a lot of goals through my high school career and this wasn't even one of them because in all honesty I didn't think I'd get to the place I ended up at," he said. So to be recognized as one of the best distance runners is just another blessing."

Now Pottorff is onto the next stage of his running career. He is already in Tallahassee and gearing up for his time in the garnet and gold where he hopes he can make an impact on the Noles.
"I just want to further my running life and train to the best of my ability and hopefully become a helping factor as it comes to helping the team making nationals," he added. "People always ask if I could cancel out the injury I had during my sophomore year and I'd never do that because it helped to shape me into the person I am. Overall, high school running has been one heck of a journey."