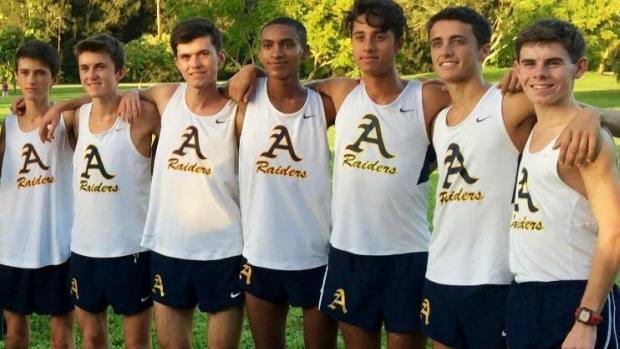 The St. Thomas Aquinas boys are working on their third straight 4A state championship. Coach Joe Hazera gives us the Scouting Report on the Raiders 2017 team.

In 2016 we successfully defended our state championship. We realized that repeating was much harder than winning the first one.
How is the team looking this year?  What are your tentative top five and top seven?

This year we are young and relatively unproven.  With only three returners from last year's championship team, we are depending on the experience and leadership from our Captain Nick Rischar to keep the ranks focused on doing what it takes to put ourselves in position to repeat as champions.
Top 7 (tentative)

Depth! Having lost four of the top seven from last year, we still have a good sized group of talented yet relatively unproven talent.
What has the training been like? Have you gone to any camps?

Summer training in South Florida. Just stating the facts (really hard to believe that we are not complaining), with average temperatures of 90+ and humidity hovering at 75% the athletes learn to adapt.  Teams north of Broward County rarely venture down to compete and why would they seeing as how we make it sound so horrible. Regardless, we have had a good summer of training. In late July, we took over 30 athletes on our yearly trip up to Brevard, North Carolina to the Brevard Distance Running Camp.
Any new additions who may contribute or any surprise non-returners?

Jamir Ferguson will be looking to contribute. Formerly from American HS, Jamir joined us this past December and brings a 16:49 personal best.  All returning runners are in camp and looking to compete for seats on the bus.
What are the team goals and meets you're keying for this year?

Our goals are to stay healthy and place ourselves in a position to defend the state championship.  On the way, we will be competing at Spanish River Invitational, Mountain Dew Invitational, and Pre-state where we will evaluate our progress and see how we measure up against the top teams.