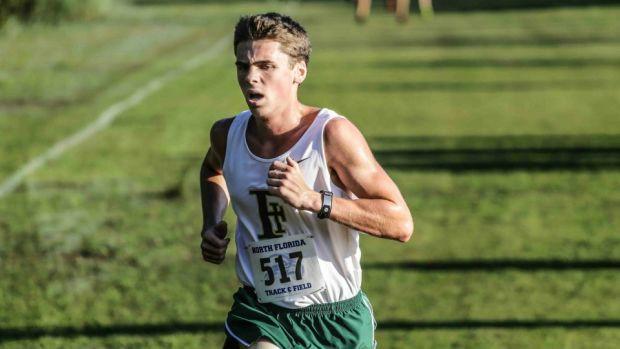 Fleming Island senior Andrew Miller is off to a stellar start in 2017 finishing 2nd at the Cecil Field Pre-Season Classic and 4th at the Spikes & Spurs Classic. Learn more about him in our Spotlight Athlete feature.

I've been running since I was about 10, mostly because my mom was running a lot of marathons at that point and I wanted to do it too. She made it fun for me, and I only ran once or twice a week. Despite all of that I really only joined cross country my freshman year because I wanted to get my weight under control. I fell in love with it.

I can recount my first cross country race hazily, mostly only that it was incredibly painful and I got the final ribbon they were giving out for finishers. In my mind my first real race was the Eagle 5k run on the roads around my high school. I'd run 5ks in the past, but I'd only jogged them. This was the first time I ran and racing was an accurate word to describe it. I ran 21:17.

How was your summer training?

My summer training has gone phenomenally. I've managed to steadily increase my mileage despite vacation plans and working part time. Unlike past summers I've stayed away from any road races and am waiting until the first races to truly test my body. I'm hoping this prolongs that "burnt out" feeling that I got around regionals last season.

My 2016 season was definitely my breakthrough season. After realizing that I want to be good at this sport and I want to run for the rest of my life I put in the training I needed to and ran well. I was hoping for a sub 16 race, but I can't complain about dropping nearly two minutes off my 5k PR.

How would you describe a typical training week?

A typical training week for me this summer has averaged out at just over 80 miles. Four or Five days a week I'll do doubles and try to tack on an extra three or so miles in the afternoon. This usually leaves me with a 10-mile run with some sort of tempo or progression built in and a 12-14-mile-long run on Sunday. It's a lot of mileage and to make sure I'm not going to hurt myself before the season even starts I've been going to see a physical therapist at least once a week to prevent pain and fix any muscle imbalances.

Do you have a favorite workout?

To be completely honest I love mile repeats. It's one of those workouts where you always get what you expect. The fast intervals with little rest sucks, but you just have to grit your teeth and get through it.

What is your favorite course to run on?

It's probably a common answer but I love the state meet course. Not because it's fun or because it's fast, it's neither of those things, but that daunting hill at the end of each lap reveals the mental toughness of those around you. I personally credit that as the reason I beat so many people I shouldn't have in that race.

Which do you think is the toughest?

The toughest course in the state for me was at the Hal Brady Recreation complex at the Half-Mile Timing Invitational. The race didn't happen this past year and it may never happen again (I suspect they couldn't find enough entries), but it's definitely the worst course I've ever ran. Basically it was two laps around a circular course about 90% uphill and 10% downhill. The race started up the steepest hill I'd ever climbed and managed to sneak all of its downhill in 200m at the end of each loop. I'm so glad I'm never running there again.

Out of all your running accomplishments which sticks out the most?

Running my mile school record is what stands out as the most prominent event in my running career. It's not incredibly quick and I just barely went under the previous record, but having my team run over to me after the race yelling about how "You did it!" Brings me the most pride.

What are your goals for the 2017 cross country season?

For this season I have no time goals, I know if I run to win the times will come. My personal goal is to race like I raced freshman year all over again. I wasn't very great, I only managed an 18:11, but every time that gun went off I'd give it my all and finish with absolutely nothing left to give. Other than that I just want to show up to the state meet and lead my team to, hopefully, something great.

Lastly, what do you love most about running?

I love the atmosphere around it. I'm yet to meet a team that's stone cold serious even before racing and it really appeals to me. I don't want to be involved in a sport where the stakes are perceived too high to have a little fun. 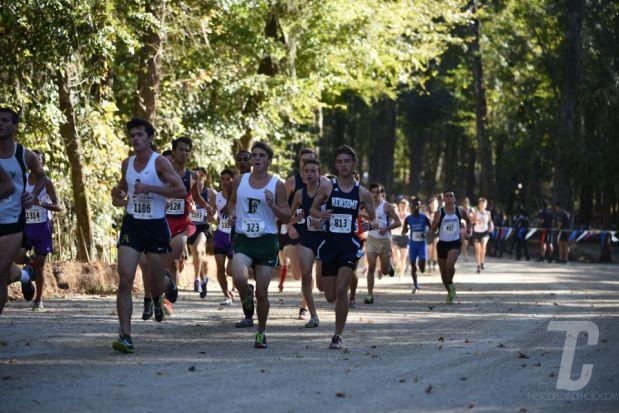 "The most difficult thing is the decision to act, the rest is merely tenacity." -Amelia Earhart.

We never race without our team prayer, it's important to me.

Right now, completely seriously, grapes. Purple grapes to be specific. They're in season during cross country and I literally eat them by the cup full.

What is the last movie you saw and what'd you think of it?

I most recently saw Guardians of the Galaxy 2 and thought the comedy was overdone and failed to stay separated from the serious parts as the first movie had done so well. 4/10.

What brand of shoes do you race/train in?

I train in Nike Pegasus 33s currently and got sucked into the hype around the new Zoom Forever XC 5s so that's what I'm racing in.

What are some things people may not know about you?

Most people don't know I still own my shorts from 5th grade because they still fit me and that I can play the saxophone. Every now and again I'll get it out just to see how it feels.

If you were stranded on an island with three items what would they be?

I'd want a lot of peanut butter because I can't live without, my GPS watch for morning runs, and an Eno hammock. You always need an Eno.