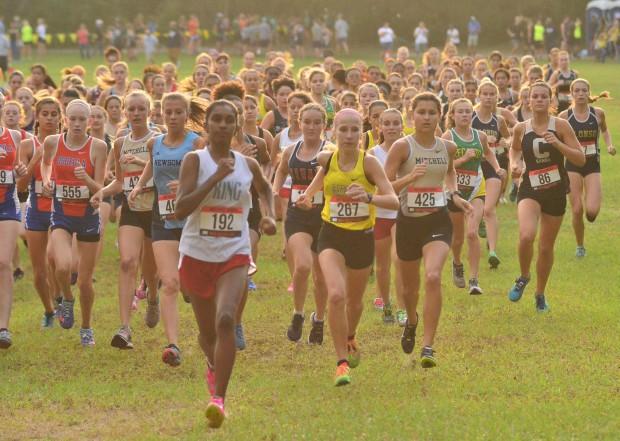 Over 800 runners laced up for the 2017 Land O' Lakes Gator Invitational at Crews Lake Park in Pasco County. The meet added the moniker "Keppel Invitatonal" in memorory of long time Land O' Lakes coach Kris Keppel. The course bears similarity to the surface mix at Holloway Park in Lakeland, only the Crews Lake course mixes in doses of pavement and doesn't have the hills of Holloway. However, Crews Lake is a tough or slow course based on the narrow trails, sandy sections and tight turns. Runners start down a grass straightaway that funnels very quickly onto pavement and then takes a right turn loop through wooded area. The next spot to view runners is when they come out near a chain-link fence backstop, near one mile. Runners disappear again, hitting trails before coming down more pavement and banking hard to the left over sand, right next to the starting area, where they begin the second loop of the course. 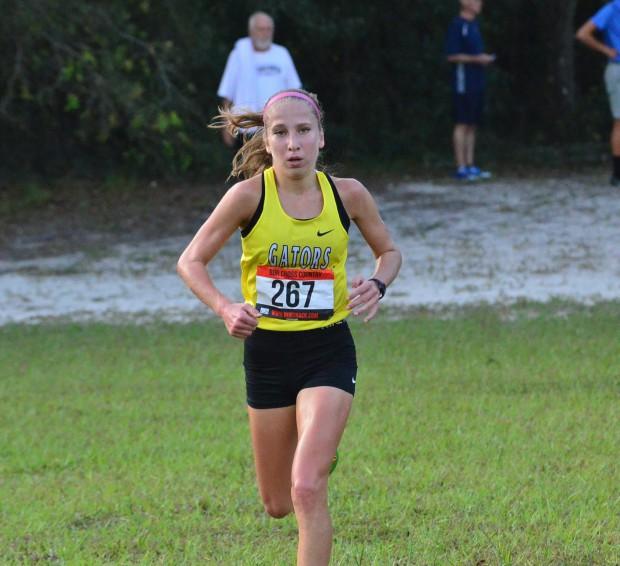 The girls race set off first and 2016 champ Natalie Abernathy knew it was prudent to try to work to the front of the pack before it funneled in. Coming out near the back stop and mile mark, Abernathy had already put six between her and Mitchell's Isabel Oliveto. Oliveto had just a couple seconds on Abernathy's teammate Estafania Acosta and Sunlake's Liina Winborn. Citrus' Jillian Felton held in fifth before the bulk of the female varsity runners. Near the 1.5-mile mark, out of the pavement and hitting the sharp turn on the sand, Abernathy already looked in complete control of the race, already with more than 20 seconds on Oliveto. Oliveto had put seven seconds between her and Acosta. Acosta stretched the gap with Winborn and Winborn stretched it on Felton. 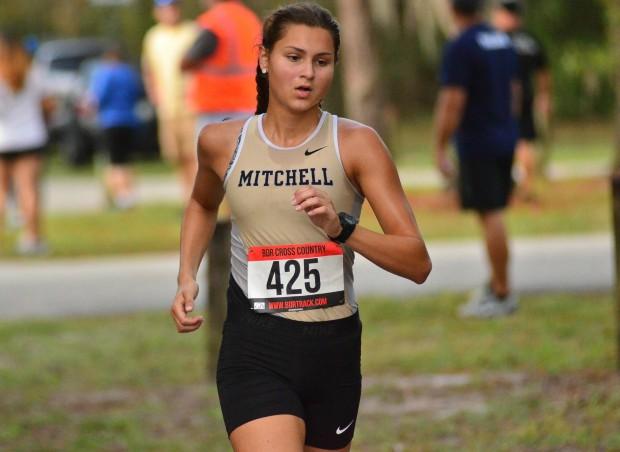 The second trip near the back stop, nearing 2.5 miles, Abernathy had the race locked up. Oliveto had stretched her lead to 14 seconds over Acotsa and Acosta had pulled more than 20 seconds ahead of Winborn. Winborn had five seconds on Felton with a big gap before the trailing group. Abernathy was the only runner in sight coming down the home stretch and she won it in 18:46.8, knocking almost 15 seconds off her 19:05 that won the 2016 meet. Oliveto took second in 19:48.7 a 32-second PR according to Mitchell head coach Alan Parmenter. 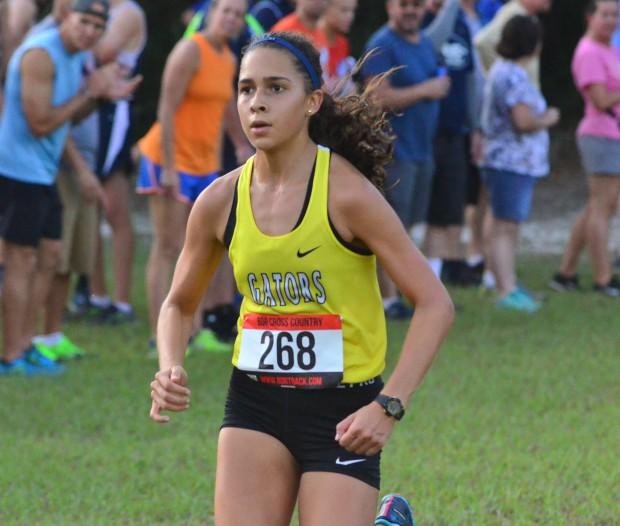 "I just kept running it through my head that this has to be my race," Oliveto said. "I tried to keep with Natalie as long as I could and when I lost her, I focused on staying in front of Nia (Acosta), listening for when people would cheer as she passed."

Acosta would take third in 20:08.5, a good place but a time that Acosta was not particularly excited about. Acosta is still coming back from a stress fracture she endured over the summer.

"My first race this season wasn't until September 1," Acosta said. "I'm trying to get better and keep improving."

Acosta did mention that her time on Saturday was 40 seconds better than her run at Holloway last weekend. 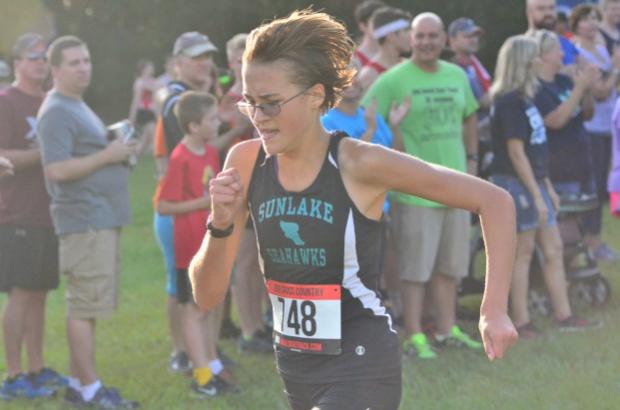 Winborn took fourth at 20:27.2 and Felton fifth at 20:33.1. Team-wise, the highly-touted Wolves topped host Land O' Lakes 79-103. Adding context to the feat, Newsome girls coach Orlando Greene elected to keep most of his varsity runners out of the race. JVcall-ups in freshman Hallie Stephens and Hannah Hoffman led the way with ninth and 10th place finishes. Juliana Tragakis and Adriana Kanarek helped push the Wolves over the top for the win. 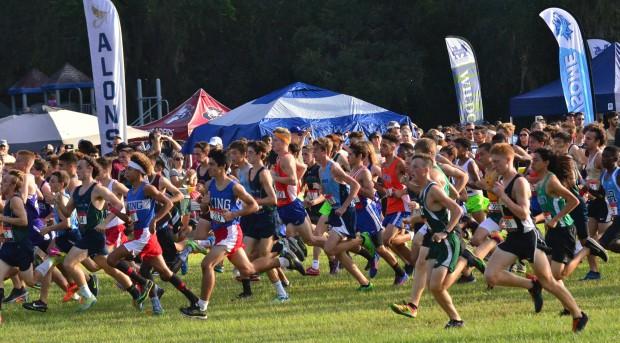 The boys race followed a similar pattern as Citrus' Jacob Hensley pushed out to an early lead. By the first trip near the back stop, Hensley was four seconds up on Gulf's John Jessup. Jessup was four seconds ahead of a pack of five that included Newsome's Alex Bugielski, Dominic Acosta, Chris Pinedo along with Seffner Christian's Paul McKenzie and River Ridge's Daniel Barron. Back down the pavement and into the sandy turn, Hensley was 10 seconds up on Jessup who had slipped almost even with the group of five. Defending champ Alex Normandia trailed in eighth at that juncture. 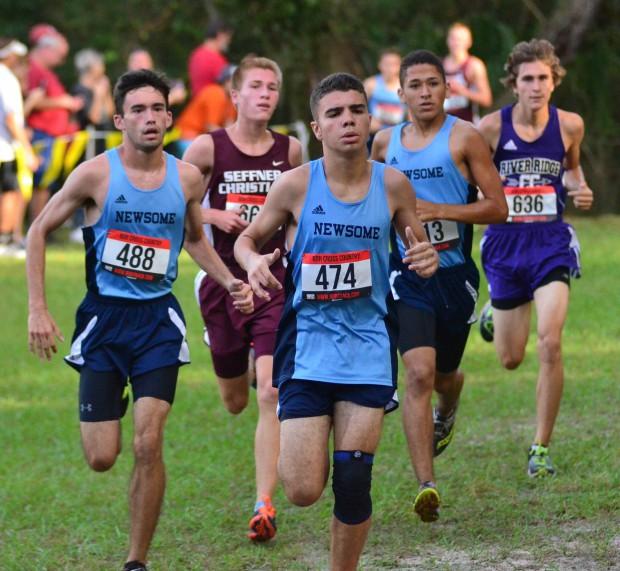 The second lap, coming out at the back stop, Hensley was 15 seconds in front. By then Bugielski had moved into second with several seconds on Jessup as Acosta and Pinedo trailed him within a few strides. Coming in for the finish was Hensley at 16:28.7. Bugielski was second but he had to fight off a late charge from Jessup. 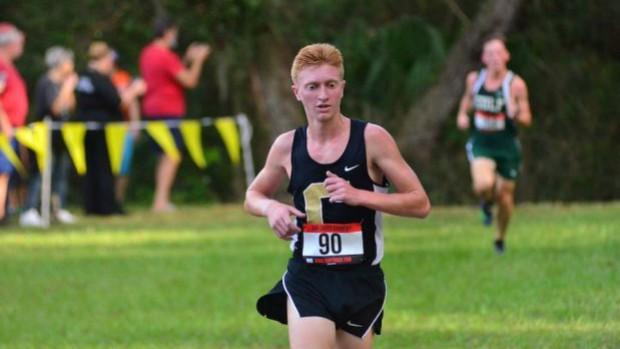 "I caught him (Jessup) after the first mile or so and we kept it close for the second but then I started to separate," Bugielski. "But he (Jessup) came back and made it very close at the end." 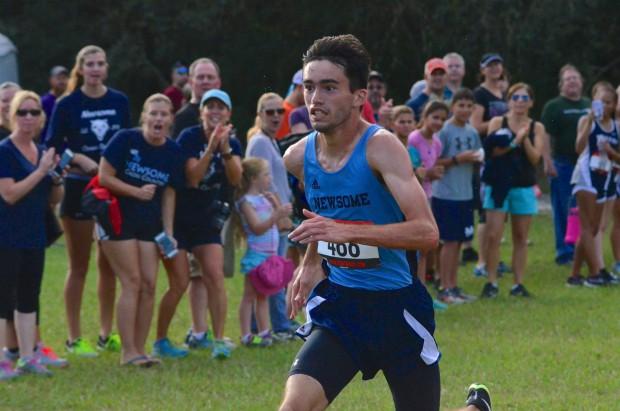 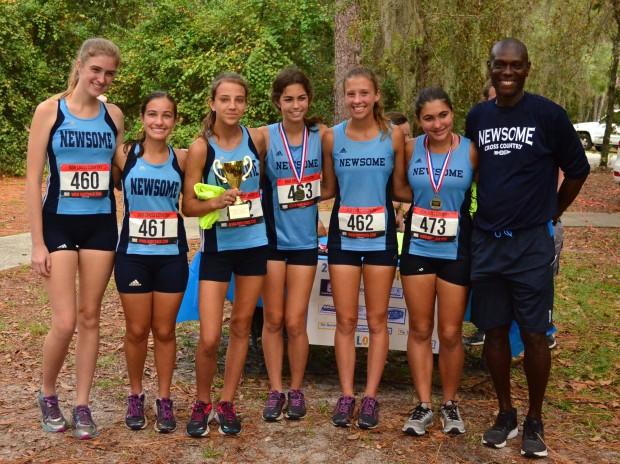 Team-wise, the Wolves were a no-contest. They put their top five runners in the top 15 spots and more than doubled up host Land O' Lakes 40-106. Mitchell was a distant third with 174. 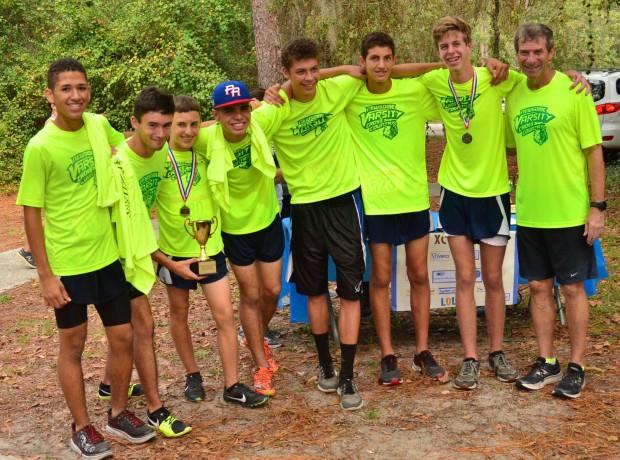 Newsome boys won with nearly a perfect score in the JV race, a 17. The Newsome girls, with many of their JV runners up on varsity yielded to Osceola for that team title.