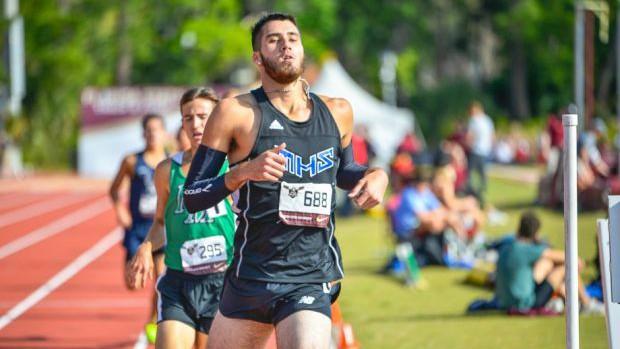 Not many people know about Palm Coast. It's commonly confused with Palm Beach or Palm Bay but it's its own utopia; a little city place on the east coast of Florida about 30-40 minutes from Daytona Beach. Palm Coast is home to many, including the only two high schools in its district: Flagler Palm Coast and Matanzas, both of which are on opposite sides of the city.

In recent years, Palm Coast has seen the rise of standouts who compete with some of the best in the nation and even go on to compete at the collegiate level, but it comes in waves.

Jacob Miley aspires to be the next stud to put Palm Coast on the map.

The Matanzas junior picked up where he left off in 2017 by opening up the 2018 outdoor season with a personal-best of 1:54.28 in the 800 meters at the Bolles Bulldog Classic earlier this month. The performance was .71 better than his previous best, which he ran at the FSU Relays last spring.

"I think my performances have been good at most but I expect more than just winning," Miley said. "I've been training to drop some pretty fast times this year and that's what I plan on doing."

For the last two years, Miley has flown under the radar, which is hard to imagine considering the fact that he's hard to miss. Towering over most at 6'6, Miley has learned to make use of his large stature, which translates to his ability to not always have to engage in a footrace since his stride takes care of that.

Even so, physical attributes will only get you so far, which is why he draws motivation from other places.

As a freshman, Miley had the opportunity to follow the success of crosstown rival FPC's Justin Pacifico (℅ 2016). Over the course of his senior year, Pacifico, who was formerly a football player like Miley, finished second at the 2015 FHSAA Cross Country State Finals, run 1:51 to win a stacked 800 meters at the Pepsi Florida Relays and eventually capture the 4A boys 800-meter state title later that spring. He also ran 4:17 over 1600 meters and 9:27 for 3200 meters, respectively.

Around this same time, Miley started to buy into the track life as he saw what it'd done for Pacifico, though unlike Pacifico, he did not hang it up entirely. He started running workouts and constantly would attempt to beat the upperclassmen and be the new kid on the block ─ the fastest new kid on the block, that is. With consistent training and inspiration from others, he began to evolve as a runner, finding his niche in the same event as Pacifico ─ the 800 meters.

Miley added that the current Florida Gator has always been a key inspiration for him, and still is.

"I do look up to Pacifico because he was someone I wanted to run like and be fast like," he said. "The fact that he was dropping these times makes me want to drive and beat him and leave a mark like he did."

Miley has already started that journey at Matanzas. Prior to Miley, the school record was held by Jan-Michael Albritton-Spain (℅ 2009) at 1:58.77. Since initially breaking it in 2017, Miley has broken and improved the school record seven times, lowering it by just over four seconds. One can only guess how much lower the time will be and how much higher the bar will be set just after this season. One must also keep in mind that he'll be back for one final season in 2019.

His rise to the top has started slow but is gradually picking up speed. At last weekend's FSU Relays, Miley had what were perhaps his best performance collectively over the course of a meet. The junior dropped a 1:52.95 to tie for a Florida no. 3 time this season (tied for US no. 4). He then dropped down to the 400 and clocked 49.89 respectively. If that wasn't enough for him, he moved up the the 1600 for the very first time and ran 4:29.89. By the end of the meet, he claimed three school records.

Even after a highly successful weekend across the board, he's not content there.

"I want to get to a point where I can compete and win any race I want," he said.

Aspirations of winning an individual state title are atop his list this season, as well as a shot at winning nationals. He competed at the AAU Junior Olympic Championships last summer and finished fifth in the finals. It is imperative for him to improve that placement.

His attempts at improving and being a top-level contender aren't too far fetched, and in track and field, anything can happen. Miley may be writing his story, but only time will tell the outcome.

Miley is entered in this weekend's 800m run at the Florida Relays which includes a nearly identical field to the one he saw at FSU Relays last weekend. His 1:52.95 is tied for the second best time in the group with James Hasell of East Lake and trails only national leader Hugh Brittenham of Estero who owns a best of 1:52.92.